(ŭp)
,
adv.
[AS.
up
,
upp
,
ūp
; akin to OFries.
up
,
op
, D.
op
, OS.
ūp
, OHG.
ūf
, G.
auf
, Icel. & Sw.
upp
, Dan.
op
, Goth.
iup
, and probably to E.
over
. See
Over
.]
1.
Aloft; on high; in a direction contrary to that of gravity; toward or in a higher place or position; above; – the opposite of
down
.
But
up
or down,
By center or eccentric, hard to tell.
Milton.
2.
Hence, in many derived uses, specifically: –
(a)
From a lower to a higher position, literally or figuratively; as, from a recumbent or sitting position; from the mouth, toward the source, of a river; from a dependent or inferior condition; from concealment; from younger age; from a quiet state, or the like; – used with verbs of motion expressed or implied.
But they presumed to go
up
unto the hilltop.
Num. xiv. 44.
I am afflicted and ready to die from my youth
up
.
Ps. lxxxviii. 15.
Up
rose the sun, and
up
rose Emelye.
Chaucer.
We have wrought ourselves
up
into this degree of Christian indifference.
Atterbury.
(b)
In a higher place or position, literally or figuratively; in the state of having arisen; in an upright, or nearly upright, position; standing; mounted on a horse; in a condition of elevation, prominence, advance, proficiency, excitement, insurrection, or the like; – used with verbs of rest, situation, condition, and the like;
as, to be
up
on a hill; the lid of the box was
up
; prices are
up
.
And when the sun was
up
, they were scorched.
Matt. xiii. 6.
Those that were
up
themselves kept others low.
Spenser.
Helen was
up
– was she?
Shakespeare
Rebels there are
up
,
And put the Englishmen unto the sword.
Shakespeare
His name was
up
through all the adjoining provinces, even to Italy and Rome; many desiring to see who he was that could withstand so many years the Roman puissance.
Milton.
Thou hast fired me; my soul’s
up
in arms.
Dryden.
Grief and passion are like floods raised in little brooks by a sudden rain; they are quickly
up
.
Dryden.
A general whisper ran among the country people, that Sir Roger was
up
.
Addison.
Let us, then, be
up
and doing,
With a heart for any fate.
Longfellow.
(c)
To or in a position of equal advance or equality; not short of, back of, less advanced than, away from, or the like; – usually followed by to or with;
as, to be
up
to the chin in water; to come
up
with one's companions; to come
up
with the enemy; to live
up
to engagements
.
As a boar was whetting his teeth,
up
comes a fox to him.
L'Estrange.
(d)
To or in a state of completion; completely; wholly; quite;
as, in the phrases to eat
up
; to drink
up
; to burn
up
; to sum
up
; etc.; to shut
up
the eyes or the mouth; to sew
up
a rent
.
☞ Some phrases of this kind are now obsolete; as, to spend up (
Prov. xxi. 20
); to kill up (
B. Jonson
).
(e)
Aside, so as not to be in use;
as, to lay
up
riches; put
up
your weapons
.
☞ Up is used elliptically for get up, rouse up, etc., expressing a command or exhortation. “Up, and let us be going.”
Judg. xix. 28.
Up
,
up
, my friend! and quit your books,
Or surely you 'll grow double.
Wordsworth.

,
p
rep.
1.
From a lower to a higher place on, upon, or along; at a higher situation upon; at the top of.
In going
up
a hill, the knees will be most weary; in going down, the thihgs.
Bacon.
2.
From the coast towards the interior of, as a country; from the mouth towards the source of, as a stream;
as, to journey
up
the country; to sail
up
the Hudson
.
3.
Upon.
[Obs.]
“Up pain of death.”
Chaucer.

, adv.
1.
Aloft; on high
But up or down -
2.
Out of bed. He is not up.
3.
Having risen from a seat.
Sir Roger was up.
4.
From a state of concealment or discumbiture.
5.
In a state of being built.
Up with my tent.
6.
Above the horizon. The sun is up.
7.
To a state of excitement. He was wrought up to a rage.
8.
To a state of advance or proficiency.
- Till we have wrought ourselves up to this degree of christian indifference.
9.
In a state of elevation or exaltation.
Those that were up, kept others low.
10.
In a state of climbing or ascending. We went up to the city or town.
11.
In a state of insurrection.
The gentle archbishop of York is up.
My soul is up in arms.
12.
In a state of being increased or raised. The river is up; the flood is up.
13.
In a state of approaching; as up comes a fox.
14.
In order. He drew up his regiment.
15.
From younger to elder years; as from his youth up.
1.
Up and down, from one place to another; here and there.
2.
From one state or position to another; backwards and forwards.
1.
Up to, to an equal highth with; as up to the chin in water.
2.
To a degree or point adequate. Live up to the principles professed.
Up with, raise; life; as, up with the fist; up with the timber.
Up is much used to modify the actions expressed by verbs. It is very often useful and necessary; very often useless.
To bear up, to sustain.
To go up, to ascend.
To lift up, to raise.
To get up, to rise from bed or a seat.
To bind up, to bind together.
To blow up, to inflate; to distend; to inflame.
To grow up, to grow to maturity.
Up stream, from the mouth towards the head of a stream; against the stream; hence up is in a direction towards the head of a stream or river; as up the country.
Up sound, in the direction from the sea; opposed to down sound, that is, in the direction of the ebb tide.
Up is used elliptically for get up, expressing a command or exhortation.
Up, let us be going. Judges 19.

, prep. From a lower to a higher place. Go up the hill. 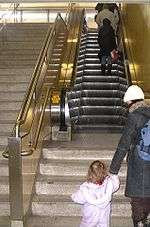 They walk up the steps.

toward the top
further along

direction opposed to the pull of gravity