,
Verb.
T.
[
imp. & p. p.
Lined
(līnd)
;
p. pr. & vb. n.
Lining
.]
[See
Line
flax.]
1.
To cover the inner surface of;
as, to
line
a cloak with silk or fur; to
line
a box with paper or tin.
The inside
lined
with rich carnation silk.
W. Browne.
2.
To put something in the inside of; to fill; to supply, as a purse with money.
The charge amounteth very high for any one man’s purse, except
lined
beyond ordinary, to reach unto.
Carew.
Till coffee has her stomach
lined
.
Swift.
3.
To place persons or things along the side of for security or defense; to strengthen by adding anything; to fortify;
as, to
line
works with soldiers
.
Line
and new repair our towns of war
With men of courage and with means defendant.
Shakespeare
4.
To impregnate; – applied to brute animals.
Creech.
Lined gold
,
gold foil having a lining of another metal.

,
Noun.
[OE.
line
, AS.
līne
cable, hawser, prob. from L.
linea
a linen thread, string, line, fr.
linum
flax, thread, linen, cable; but the English word was influenced by F.
ligne
line, from the same L. word
linea
. See
Linen
.]
1.
A linen thread or string; a slender, strong cord; also, a cord of any thickness; a rope; a hawser;
as, a fishing
line
; a
line
for snaring birds; a clothes
line
; a tow
line
.
Who so layeth
lines
for to latch fowls.
Piers Plowman.
2.
A more or less threadlike mark of pen, pencil, or graver; any long mark;
as, a chalk
line
.
3.
The course followed by anything in motion; hence, a road or route;
as, the arrow descended in a curved
line
; the place is remote from
lines
of travel.
4.
Direction;
as, the
line
of sight or vision
.
5.
A row of letters, words, etc., written or printed; esp., a row of words extending across a page or column.
6.
A short letter; a note;
as, a
line
from a friend
.
7.
(Poet.)
A verse, or the words which form a certain number of feet, according to the measure.
In the preceding
line
Ulysses speaks of Nausicaa.
Broome.
8.
Course of conduct, thought, occupation, or policy; method of argument; department of industry, trade, or intellectual activity.
He is uncommonly powerful in his own
line
, but it is not the
line
of a first-rate man.
Coleridge.
9.
(Math.)
That which has length, but not breadth or thickness.
10.
The exterior limit of a figure, plat, or territory; boundary; contour; outline.
Eden stretched her
line

(līn)
,
Verb.
T.
1.
To mark with a line or lines; to cover with lines;
as, to
line
a copy book
.
He had a healthy color in his cheeks, and his face, though
lined
, bore few traces of anxiety.
Dickens.
2.
To represent by lines; to delineate; to portray.
[R.]
“Pictures fairest lined.”
Shak.
3.
To read or repeat line by line;
as, to
line
out a hymn
.
This custom of reading or
lining
, or, as it was frequently called “deaconing” the hymn or psalm in the churches, was brought about partly from necessity.
N. D. Gould.
4.
To form into a line; to align;
as, to
line
troops
.
To line bees
,
to track wild bees to their nest by following their line of flight.
–
To line up
(Mach.)
,
to put in alignment; to put in correct adjustment for smooth running. See 3d
Line
, 19.

,
Noun.
[L. linea, linum; Gr. flax.]
1.
In geometry, a quantity extended in length, without breadth or thickness; or a limit terminating a surface.
2.
A slender string; a small cord or rope. The angler uses a line and hook. The seaman uses a hand line, a hauling line, spilling lines, &c.
3.
A thread, string or cord extended to direct any operation.
We as by line upon the ocean go.
4.
Lineament; a mark in the hand or face.
He tipples palmistry, and dines on all her fortune-telling lines.
5.
Delineation; sketch; as the lines of a building.
6.
Contour; outline; exterior limit of a figure.
Free as thy stroke, yet faultless as thy line.
7.
In writing, printing and engraving, the words and letters which stand on a level in one row, between one margin and another; as a page of thirty lines.
8.
In poetry, a verse, or the words which form a certain number of feet, according to the measure.
9.
A short letter; a note. I received a line from my friend by the last mail.
10.
A rank or row of soldiers, or the disposition of an army drawn up with an extended front; or the like disposition of a fleet prepared for engagement.
11.
A trench or rampart; an extended work in fortification.
Unite thy forces and attack their lines.
12.
Method; disposition; as line of order.
13.
Extension; limit; border.
Eden stretched her line from Auran eastward to the royal towers of great Seleucia.
14.
Equator; equinoctial circle.
When the sun below the line descends -
15.
A series or succession of progeny or relations, descending from a common progenitor. We speak of the ascending or descending line; the line of descent; the male line; a line of kings.
16.
The twelfth part of an inch.
17.
A straight extended mark.
18.
A straight or parallel direction. The houses must all stand in a line. Every new building must be set in a line with other on the same street.
19.
Occupation; employment; department or course of business. We speak of men in the same line of business.
20.
Course; direction.
What general line of conduct ought to be pursued?
21.
Lint or flax. [Seldom used.]
22.
In heraldry, lines are the figures used in armories to divide the shield into different parts, and to compose different figures.
23.
In Scripture, line signifies a cord for measuring; also, instruction, doctrine. Ps. 19. Is. 28.
A right line, a straight or direct line; the shortest line that can be drawn between two points.
Horizontal line, a line drawn parallel to the horizon.
Equinoctial line, in geography, a great circle on the earth's surface, at 90 degrees distance from each pole, and bisecting the earth at that part. In astronomy, the circle which the sun seems to describe, in March and September, when the days and nights are of equal length.
Meridian line, an imaginary circle drawn through the two poles of the earth, and any part of its surface.
A ship of the line, a ship of war large enough to have a place in the line of battle. All ships carrying seventy four or more large guns, are ships of the line. Smaller ships may sometimes be so called.

,
Verb.
T.
[supposed to be from L. linum, flax, whence linen, which is often used for linings.]
1.
To cover on the inside; as a garment lined with linen, fur or silk; a box lined with paper or tin.
2.
To put in the inside.
- What if I do line one of their hands?
3.
To place along by the side of any thing for guarding; as, to line a hedge with riflemen; to line works with soldiers.
4.
To strengthen by additional works or men.
Line and new repair your towns of war with men of courage.
5.
To cover; to add a covering; as, to line a crutch.
6.
To strengthen with any thing added.
Who lined himself with hope.
7.
To impregnate; applied to irrational animals.

From Karoline and other female names ending in -line. 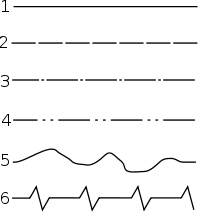 A diagram showing the locations of the five major lines of latitude on an equirectangular projection of the Earth.

Four eighth notes beamed together on a staff, the series of horizontal lines in music.

In graph theory, lines or edges connect the nodes.

Stretford End of Old Trafford in Manchester (1992). In soccer, the goal line is the boundary of the smaller rectangle that touches the goal as seen in the picture. 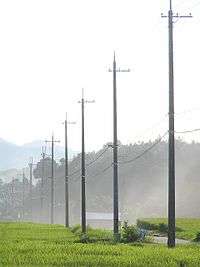 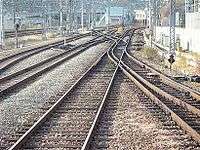 A product line of similar video game devices by Nintendo.
A man holding a rope.
A woman using a fire hose.

A family tree with the line/lineage of descendants of Queen Victoria.

Painting of Prussian Infantry attacking in lines during the Battle of Hohenfriedberg. 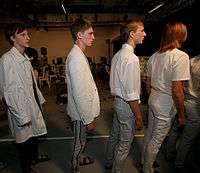 A line of people.

A man drinking tea in Bangladesh on a winter morning. Lines (wrinkles) can be seen on his face. 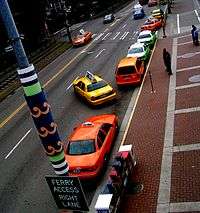 Assuming the yellow taxi is moving backwards, it is in the process of lining up with other taxis.

rope, cord, or string
path through two or more points, threadlike mark
geometry: infinite one-dimensional figure
geometry: continuous finite segment of such a figure
graph theory: edge of a graph
geography: circle of latitude or of longitude, as represented on a map
geography: equator
music: one of the straight horizontal and parallel prolonged strokes on and between which the notes are placed
long tape, or a narrow ribbon of steel, etc., marked with subdivisions, as feet and inches, for measuring; a tapeline
cricket: horizontal path of a ball towards the batsman
direction, path
telephone or network connection
connected series of public conveyances, and hence, an established arrangement for forwarding merchandise, etc.
fortifications: trench or rampart
exterior limit of a figure, plat, or territory; boundary; contour; outline
bible: that which was measured by a line, as a field or any piece of land set apart
threadlike crease marking the face or the hand; hence, characteristic mark
lineament; feature; figure
straight sequence of people, queue
military: regular infantry of an army
series or succession of ancestors or descendants of a given person
single horizontal row of text on a screen, printed paper, etc.
poetic: verse
sentence of dialogue, especially in a script or screenplay
course of conduct, thought, occupation, or policy
official, stated position of an individual or political faction
products or services sold by a business, or the business itself
stock exchange: number of shares taken by a jobber
measure of length, one twelfth of an inch
baseball: batter’s box
fencing: position in which the fencers hold their swords
engineering: proper relative position or adjustment of parts
amount of powdery drug
population of cells derived from a single cell and containing the same genetic makeup
perfusion line

to place (objects) into a line
to place persons or things along the side of for security or defense
to mark with a line
obsolete: to represent by lines; delineate; portray
to read or repeat line by line
to form or enter into a line
baseball: to hit a line drive

cover the inside surface of (something)
to fill or supply, as a purse with money

of a dog: impregnate

From Caroline or, less often, from Nicoline, Pauline or similar names.