,
Verb.
I.
1.
To suffer; to be afflicted.
[Obs.]
2.
To languish; to lose flesh or wear away, under any distress or anexiety of mind; to droop; – often used with away.
“The roses wither and the lilies pine.”
Tickell.
3.
To languish with desire; to waste away with longing for something; – usually followed by for.
For whom, and not for Tybalt, Juliet
pined
.
Shakespeare
Syn. – To languish; droop; flag; wither; decay.

,
Noun.
[AS.
pīn
, L.
pinus
.]
1.
(Bot.)
Any tree of the coniferous genus
Pinus
. See
Pinus
.
☞ There are about twenty-eight species in the
United States
, of which the
white pine
(
Pinus Strobus
), the
Georgia pine
(
Pinus australis
), the
red pine
(
Pinus resinosa
), and the great West Coast
sugar pine
(
Pinus Lambertiana
) are among the most valuable. The
Scotch pine
or
fir
, also called
Norway
or
Riga pine
(
Pinus sylvestris
), is the only British species. The
nut pine
is any pine tree, or species of pine, which bears large edible seeds. See
Pinon
.

The spruces, firs, larches, and true cedars, though formerly considered pines, are now commonly assigned to other genera.
2.
The wood of the pine tree.
3.
A pineapple.
Ground pine
.
(Bot.)
See under
Ground
.
–
Norfolk Island pine
(Bot.)
,
a beautiful coniferous tree, the
Araucaria excelsa
.
–
Pine barren
,
a tract of infertile land which is covered with pines.
[Southern U.S.]
–
Pine borer
(Zool.)
,
any beetle whose larvæ bore into pine trees.
–
Pine finch
.
(Zool.)
See
Pinefinch
, in the Vocabulary.
–
Pine grosbeak
(Zool.)
,
a large grosbeak (
Pinicola enucleator
), which inhabits the northern parts of both hemispheres. The adult male is more or less tinged with red.
–
Pine lizard
(Zool.)
,
a small, very active, mottled gray lizard (
Sceloporus undulatus
), native of the Middle States; – called also
swift
,
brown scorpion
, and
alligator
.
–
Pine marten
.
(Zool.)
(a)
A European weasel (
Mustela martes
), called also
sweet marten
, and
yellow-breasted marten
.
(b)
The American sable. See
Sable
.
–
Pine moth
(Zool.)
,
any one of several species of small tortricid moths of the genus
Retinia
, whose larvæ burrow in the ends of the branchlets of pine trees, often doing great damage.
–
Pine mouse
(Zool.)
,
an American wild mouse (
Arvicola pinetorum
), native of the Middle States. It lives in pine forests.
–
Pine needle
(Bot.)
,
one of the slender needle-shaped leaves of a pine tree. See
Pinus
.
–
Pine-needle wool
.
See
Pine wool
(below).
–
Pine oil
,
an oil resembling turpentine, obtained from fir and pine trees, and used in making varnishes and colors.
–
Pine snake
(Zool.)
,
a large harmless North American snake (
Pituophis melanoleucus
). It is whitish, covered with brown blotches having black margins. Called also
bull snake
. The Western pine snake (
Pituophis Sayi
) is chestnut-brown, mottled with black and orange.
–
Pine tree
(Bot.)
,
a tree of the genus
Pinus
; pine.
–
Pine-tree money
,
money coined in
Massachusetts
in the seventeenth century, and so called from its bearing a figure of a pine tree. The most noted variety is the
pine tree shilling
.
–
Pine weevil
(Zool.)
,
any one of numerous species of weevils whose larvæ bore in the wood of pine trees. Several species are known in both
Europe
and
America
, belonging to the genera
Pissodes
,
Hylobius
, etc.
–
Pine wool
,
a fiber obtained from pine needles by steaming them. It is prepared on a large scale in some of the
Southern United States
, and has many uses in the economic arts; – called also
pine-needle wool
, and
pine-wood wool
.

,
Noun.
[L. pinus.] A tree of the genus Pinus, of many species, some of which furnish timber of the most valuable kind. The species which usually bear this name in the United States, are the white pine, Pinus strobus,the prince of our forests; the yellow pine, Pinus resinosa; and the pitch pine, Pinus rigida. The other species of this genus are called by other names, a fir,hemlock, larch, spruce, &c.

, v.i.
1.
To languish; to lose flesh or wear away under any distress of anxiety of mind; to grow lean; followed sometimes by away.
Ye shall not mourn nor weep, but ye shall pine away for your iniquities. Ezek.24.
2.
To languish with desire; to waste away with longing for something; usually followed by for.
Unknowing that she pin'd for your return.

,
Verb.
T.
To wear out; to make to languish.
Where shivering cold and sickness pines the clime.
Beroe pined with pain.
1.
To grieve for; to bemoan in silence.
Abashed the devil stood--
Virtue in her own shape how lovely, saw,
And pined his loss.
[In the transitive sense, this verb is now seldom used, and this use is improper, except by ellipsis.] 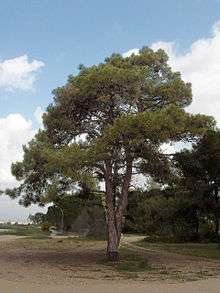 to languish, to droop
to long for sufferingly
to grieve or mourn for
to inflict pain upon; to torment; to torture; to afflict