,
Noun.
[OE. & AS.
werre
; akin to OHG.
werra
scandal, quarrel, sedition,
werran
to confound, mix, D.
warren
, G.
wirren
, ver
wirren
, to embroil, confound, disturb, and perhaps to E.
worse
; cf. OF.
werre
war, F.
querre
, of Teutonic origin. Cf.
Guerrilla
,
Warrior
.]
1.
A contest between nations or states, carried on by force, whether for defence, for revenging insults and redressing wrongs, for the extension of commerce, for the acquisition of territory, for obtaining and establishing the superiority and dominion of one over the other, or for any other purpose; armed conflict of sovereign powers; declared and open hostilities.
Men will ever distinguish
war
from mere bloodshed.
F. W. Robertson.
☞ As war is the contest of nations or states, it always implies that such contest is authorized by the monarch or the sovereign power of the nation. A war begun by attacking another nation, is called an offensive war, and such attack is aggressive. War undertaken to repel invasion, or the attacks of an enemy, is called defensive.
2.
(Law)
A condition of belligerency to be maintained by physical force. In this sense, levying war against the sovereign authority is treason.
3.
Instruments of war.
[Poetic]
His complement of stores, and total
war
.
Prior.
4.
Forces; army.
[Poetic]
On their embattled ranks the waves return,
And overwhelm their
war
.
Milton.
5.
The profession of arms; the art of war.
Thou art but a youth, and he is a man of
war
from his youth.
1 Sam. xvii. 33.
6.
a state of opposition or contest; an act of opposition; an inimical contest, act, or action; enmity; hostility.
“Raised impious war in heaven.”
Milton.
The words of his mouth were smoother than butter, but
war
was in his heart.
Ps. lv. 21.
Civil war
,
a war between different sections or parties of the same country or nation.
–
Holy war
.
See under
Holy
.
–
Man of war
.
(Naut.)
See in the Vocabulary.
–
Public war
,
a war between independent sovereign states.
–
War cry
,
a cry or signal used in war;
as, the Indian
war cry
.
–
War dance
,
a dance among savages preliminary to going to war. Among the North American Indians, it is begun by some distinguished chief, and whoever joins in it thereby enlists as one of the party engaged in a warlike excursion.
Schoolcraft.
–
War field
,
a field of war or battle.
–
War horse
,
a horse used in war; the horse of a cavalry soldier; especially, a strong, powerful, spirited horse for military service; a charger.
–
War paint
,
paint put on the face and other parts of the body by savages, as a token of going to war.
“Wash the war paint from your faces.”
Longfellow.
–
War song
,
a song of or pertaining to war; especially, among the American Indians, a song at the war dance, full of incitements to military ardor.
–
War whoop
,
a war cry, especially that uttered by the American Indians.

,
Verb.
I.
[
imp. & p. p.
Warred
;
p. pr. & vb. n.
Warring
.]
1.
To make war; to invade or attack a state or nation with force of arms; to carry on hostilities; to be in a state by violence.
Rezin the king of Syria, and Pekah the son of Remaliah, king of Israel, went up toward Jerusalem to
war
against it.
Isa. vii. 1.
Why should I
war
without the walls of Troy?
Shakespeare
Our countrymen were
warring
on that day!
Byron.
2.
To contend; to strive violently; to fight.
“Lusts which war against the soul.”
1 Pet. ii. 11.

,
Noun.
[G., to perplex, embroil, disturb. The primary sense of the root is to strive, struggle, urge, drive, or to turn, to twist.]
1.
A contest between nations or states, carried on by force, either for defense, or for revenging insults and redressing wrongs, for the extension of commerce or acquisition of territory, or for obtaining and establishing the superiority and dominion of one over the other. These objects are accomplished by the slaughter or capture of troops, and the capture and destruction of ships, towns and property. Among rude nations, war is often waged and carried on for plunder. As war is the contest of nations or states, it always implies that such contest is authorized by the monarch or the sovereign power of the nation. When war is commenced by attacking a nation in peace, it si called an offensive war, and such attack is aggressive. When war is undertaken to repel invasion or the attacks of an enemy, it is called defensive, and a defensive war is considered as justifiable. Very few of the wars that have desolated nations and deluged the earth with blood, have been justifiable. Happy would it be for mankind, if the prevalence of Christian principles might ultimately extinguish the spirit of war, and if the ambition to be great, might yield to the ambition of being good.
Preparation for war is sometimes the best security for peace.
2.
In poetical language, instruments of war.
His complement of stores, and total war.
3.
Poetically, forces; army.
Oer the embattled ranks the waves return, and overwhelm their war.
4. The profession of arms; art of war; as a fierce man of war. Isaiah 2.
5.
Hostility; state of opposition or contest; act of opposition.
6.
Enmity; disposition to contention.
The words of his mouth were smoother than butter, but war was in his heart. Psalm 55.
Man of war, in naval affairs, a ship of large size, armed and equipped for attack or defense.
Holy war, a crusade; a war undertaken to deliver the Holy Land, or Judea, from infidels. These holy wars were carried on by most unholy means.

,
Verb.
I.
1.
To make war; to invade or attack a nation or state with force of arms; to carry on hostilities; or to be in a state of contest by violence.
He teacheth my hands to war. 2 Samuel 22.
And they warred against eh Midianites. Numbers 31.
Why should I war without the walls of Troy?
2.
To contend; to strive violently; to be in a state of opposition.
Lusts which war against the soul. 1 Peter 2. 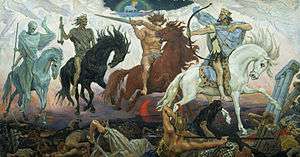 Four Horsemen of the Apocalypse, an 1887 painting by Victor Vasnetsov. The Lamb is visible at the top.

(a war, taken specifically): "The War" frequently refers to the Second World War (World War II/WW2/WWII) in informal contexts in Britain, and less commonly so in the United States and Canada

the personification of war

to engage in conflict