,
Noun.
[OE.
sor
,
sar
, AS.
sār
. See
Sore
,
Adj.
]
1.
A place in an animal body where the skin and flesh are ruptured or bruised, so as to be tender or painful; a painful or diseased place, such as an ulcer or a boil.
The dogs came and licked his
sores
.
Luke xvi. 21.
2.
Fig.: Grief; affliction; trouble; difficulty.
Chaucer.
I see plainly where his
sore
lies.
Sir W. Scott.
Gold sore
.
(Med.)
See under
Gold
,
Noun.

,
Noun.
1.
A place in an animal body where the skin and flesh are ruptured or bruised, so as to be pained with the slightest pressure.
2.
An ulcer; a boil.
3.
In Scriptures, grief; affliction. 2 Chron. 6.

, a.
1.
Tender and susceptible of pain from pressure; as, a boil, ulcer or abscess is very sore; a wounded place is sore; inflammation renders a part sore.
2.
Tender, as the mind; easily pained, grieved or vexed; very susceptible of irritation from any thing that crosses the inclination. Malice and hatred are very fretting, and apt to make our minds sore and uneasy.
3.
Affected with inflammation; as sore eyes.
4.
Violent with pain; severe; afflictive; distressing; as a sore disease; sore evil or calamity; a sore night.
5.
Severe; violent; as a sore conflict.
6.
Criminal; evil.

,
adv.
1.
With painful violence; intensely; severely; grievously. They hand presseth me sore.
2.
Greatly; violently; deeply. He was sorely afflicted at the loss of his son. Sore sigh'd the knight, who this long sermon heard. 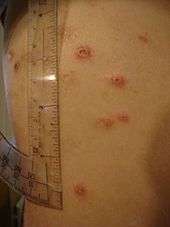