(nŏt)
,
Noun.
[OE.
knot
,
knotte
, AS.
cnotta
; akin to D.
knot
, OHG.
chnodo
,
chnoto
, G.
knoten
, Icel.
knūtr
, Sw.
knut
, Dan.
knude
, and perh. to L.
nodus
. Cf.
Knout
,
Knit
.]
1.
(a)
A fastening together of the parts or ends of one or more threads, cords, ropes, etc., by any one of various ways of tying or entangling.
(b)
A lump or loop formed in a thread, cord, rope. etc., as at the end, by tying or interweaving it upon itself.
(c)
An ornamental tie, as of a ribbon.
☞ The names of knots vary according to the manner of their making, or the use for which they are intended; as, dowknot, reef knot, stopper knot, diamond knot, etc.
2.
A bond of union; a connection; a tie.
“With nuptial knot.”
Shak.
Ere we knit the
knot
that can never be loosed.
Bp. Hall.
3.
Something not easily solved; an intricacy; a difficulty; a perplexity; a problem.
Knots
worthy of solution.
Cowper.
A man shall be perplexed with
knots
, and problems of business, and contrary affairs.
South.
4.
A figure the lines of which are interlaced or intricately interwoven, as in embroidery, gardening, etc.
“Garden knots.”
Bacon.
Flowers worthy of paradise, which, not nice art
In beds and curious
knots
, but nature boon
Poured forth profuse on hill, and dale, and plain.
Milton.
5.
A cluster of persons or things; a collection; a group; a hand; a clique;
as, a
knot
of politicians
.
“Knots of talk.”
Tennyson.
His ancient
knot
of dangerous adversaries.
Shakespeare
Palms in cluster,
knots
of Paradise.
Tennyson.
As they sat together in small, separate
knots
, they discussed doctrinal and metaphysical points of belief.
Sir W. Scott.
6.
A portion of a branch of a tree that forms a mass of woody fiber running at an angle with the grain of the main stock and making a hard place in the timber. A loose knot is generally the remains of a dead branch of a tree covered by later woody growth.
7.
A knob, lump, swelling, or protuberance.
With lips serenely placid, felt the
knot

Climb in her throat.
Tennyson.
8.
A protuberant joint in a plant.
9.
The point on which the action of a story depends; the gist of a matter.
[Obs.]
I shoulde to the
knotte
condescend,
And maken of her walking soon an end.
Chaucer.
10.
(Mech.)
See
Node
.
11.
(Naut.)
(a)
A division of the log line, serving to measure the rate of the vessel’s motion. Each knot on the line bears the same proportion to a mile that thirty seconds do to an hour. The number of knots which run off from the reel in half a minute, therefore, shows the number of miles the vessel sails in an hour.
Hence:
(b)
A nautical mile, or 6080.27 feet;
as, when a ship goes nautical eight miles an hour, her speed is said to be eight
knots
.
12.
A kind of epaulet. See
Shoulder knot
.
13.
(Zool.)
A sandpiper (
Tringa canutus
), found in the northern parts of all the continents, in summer. It is grayish or ashy above, with the rump and upper tail coverts white, barred with dusky. The lower parts are pale brown, with the flanks and under tail coverts white. When fat it is prized by epicures. Called also
dunne
.
☞ The name is said to be derived from King Canute, this bird being a favorite article of food with him.
The
knot
that called was Canutus' bird of old,
Of that great king of Danes his name that still doth hold,
His appetite to please that far and near was sought.
Drayton.

,
Noun.
not.
[L.nodus; probably connected with knit, but perhaps from swelling or gathering.]
1.
The complication of threads made by knitting; a tie; union of cords by interweaving; as a knot difficult to be untied.
2.
Any figure, the lines of which frequently intersect each other; as a knot in gardening.
In beds and curious knots.
3.
A bond of association or union; as the nuptial knot.
4.
The part of a tree where a branch shoots.
5.
The protuberant joint of a plant.
6.
A cluster; a collection; a group; as a knot of ladies; a knot of figures in painting.
7.
Difficulty; intricacy; something not easily solved.
8.
Any intrigue or difficult perplexity of affairs.
9.
A bird of the genus Tringa.
10. An epaulet.
11. In seamen's language, a division of the logline, which answers to half a minute, as a mile does to an hour, or it is the hundred and twentieth part of a mile. Hence, when a ship goes eight miles an hour, she is said to go eight knots. 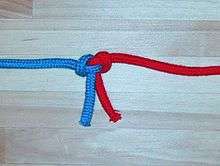 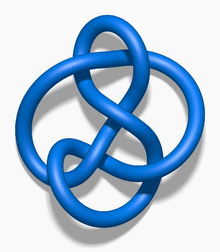 form into a knot; tie with knot(s)
form wrinkles in forehead
to tie together

Supposed to be derived from the name of King Canute, with whom the bird was a favourite article of food. See the species epithet canutus.