,
Noun.
1.
The thrust of a pointed weapon.
2.
A wound with a sharp-pointed weapon;
as, to fall by the
stab
of an assassin
.
Shak.
3.
Fig.: An injury inflicted covertly or suddenly;
as, a
stab
given to character
.

,
Verb.
T.
[This word contains the elements, and is probably from the primary sense, of the L., to point or prick, and a multitude of others in many languages. The radical sense is to thrust; but I know not to what oriental roots they are allied.]
1.
To pierce with a pointed weapon; as, to be stabbed by a dagger or a spear; to stab fish or eels.
2.
To wound mischievously or mortally; to kill by the thrust of a pointed instrument.
3.
To injure secretly or by malicious falsehood or slander; as, to stab reputation.

,
Verb.
I.
1.
To give a wound with a pointed weapon.
None shall dare with shortend sword to stab in closer war.
2.
To give a mortal wound.
He speaks poniards, and every word stabs.
To stab at, to offer a stab; to thrust a pointed weapon at.

,
Noun.
1.
The thrust of a pointed weapon.
2.
A wound with a sharp pointed weapon; as, to fall by the stab of an assassin.
3.
An injury given in the dark; a sly mischief; as a stab given to character. 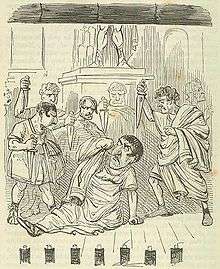 a man about to be stabbed

From Middle High German stap, stab, from Old High German stab, from Proto-Germanic *stabaz. Cognate with English staff, Dutch staf, Swedish stav, Old Norse stafr. The meaning co-workers is secondary: in the German word Generalstab ‎(“General Staff”) the meaning changed from the staff as a symbol of authority to the group of military officers and later to any group of co-workers.[1]