(fĭṉ′gẽr)
,
Noun.
[AS.
finger
; akin to D.
vinger
, OS. & OHG.
fingar
, G.
finger
, Icel.
fingr
, Sw. & Dan.
finger
, Goth.
figgrs
; of unknown origin; perh. akin to E.
fang
.]
1.
One of the five terminating members of the hand; a digit; esp., one of the four extremities of the hand, other than the thumb.
2.
Anything that does the work of a finger; as, the pointer of a clock, watch, or other registering machine;
especially
(Mech.)
a small projecting rod, wire, or piece, which is brought into contact with an object to effect, direct, or restrain a motion.
3.
The breadth of a finger, or the fourth part of the hand; a measure of nearly an inch; also, the length of finger, a measure in domestic use in the United States, of about four and a half inches or one eighth of a yard.
A piece of steel three
fingers
thick.
Bp. Wilkins.
4.
Skill in the use of the fingers, as in playing upon a musical instrument.
[R.]
She has a good
finger
.
Busby.
Ear finger
,
the little finger.
–
Finger alphabet
.
See
Dactylology
.
–
Finger bar
,
the horizontal bar, carrying slotted spikes, or fingers, through which the vibratory knives of mowing and reaping machines play.
–
Finger board
(Mus.)
,
the part of a stringed instrument against which the fingers press the strings to vary the tone; the keyboard of a piano, organ, etc.; manual.
–
Finger bowl
Finger glass
,
a bowl or glass to hold water for rinsing the fingers at table.
–
Finger flower
(Bot.)
,
the foxglove.
–
Finger grass
(Bot.)
,
a kind of grass (
Panicum sanguinale
) with slender radiating spikes; common crab grass. See
Crab grass
, under
Crab
.
–
Finger nut
,
a fly nut or thumb nut.
–
Finger plate
,
a strip of metal, glass, etc., to protect a painted or polished door from finger marks.
–
Finger post
,
a guide post bearing an index finger.
–
Finger reading
,
reading printed in relief so as to be sensible to the touch; – so made for the blind.
–
Finger shell
(Zool.)
,
a marine shell (
Pholas dactylus
) resembling a finger in form.
–
Finger sponge
(Zool.)
,
a sponge having finger-shaped lobes, or branches.
–
Finger stall
,
a cover or shield for a finger.
–
Finger steel
,
a steel instrument for whetting a currier’s knife.
To burn one's fingers
.
See under
Burn
.
–
To have a finger in
,
to be concerned in.
[Colloq.]
–
To have at one's fingers' ends
,
to be thoroughly familiar with.
[Colloq.]

,
Verb.
I.
(Mus.)
To use the fingers in playing on an instrument.
Busby.

,
Noun.
fing'ger.
1.
One of the extreme parts of the hand, a small member shooting to a point. The fingers have joints which peculiarly fit them to be the instruments of catching, seizing and holding. When we speak of the fingers generally, we include the thumb; as the five fingers. But we often make a distinction. The fingers and thumb consist of fifteen bones; three to each. The word is applied to some other animals as well as to man.
2.
A certain measure. We say a finger's breadth, or the breadth of the four fingers, or of three fingers.
3.
The hand.
Who teacheth my fingers to fight. Ps. 146.
4.
The finger or fingers of God, in scripture, signify his power, strength or operation.
The magicians said to Pharaoh, this is the finger of God.
Ex. 8.
5.
In music, ability; skill in playing on a keyed instrument. She has a good finger.

,
Verb.
I.
To dispose the fingers aptly in playing on an instrument.

From Old Frisian finger, from Proto-Germanic *fingraz. More at finger. 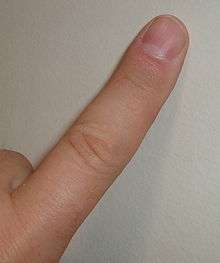 extremity of the hand
piece of food
anything that does work of a finger
finger pier
small amount of beverage in a glass
the breadth of a finger
skill in the use of the fingers, as in playing upon a musical instrument

or (with neuter gender)

The neuter declension is much more common than the common declination.