,
Verb.
I.
To hold or carry the toes (in a certain way).
To toe in
,
to stand or carry the feet in such a way that the toes of either foot incline toward the other.
–
To toe out
,
to have the toes of each foot, in standing or walking, incline from the other foot.

,
Noun.
[L. digitus . Toe is contracted from tog, the primary word on which L. digitus is formed, coinciding with dug, and signifying a shoot.]
1.
One of the small members which form the extremity of the foot, corresponding to a finger on the hand. The toes in their form and structure resemble the fingers, but are shorter.
2.
The fore part of the hoof of a horse, and of other hoofed animals.
3.
The member of a beast's foot corresponding to the toe in man. 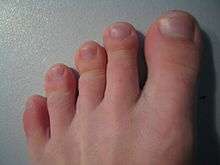 each of the five digits on the end of the foot
any equivalent part in an animal
part of a shoe or sock covering the toe
something resembling a toe, especially at the bottom or extreme end of something
alignment of the wheels of a road vehicle

From Dutch toe ‎(“then”), a chiefly dialect variant of toen, from Middle Dutch doe. The -n in Dutch toen was added by analogy with dan ‎(“then”).

We’re going to the new school.

This word is often encountered following a noun phrase and could arguably be said to be a postposition rather than an adverb.