(shoō)
,
Noun.
;
pl.
Shoes
(shoōz)
,
formerly
Shoon
(shoōn)
,
now provincial
.
[OE.
sho
,
scho
, AS.
scōh
,
sceóh
; akin to OFries.
skō
, OS.
skōh
, D.
schoe
,
schoen
, G.
schuh
, OHG.
scuoh
, Icel.
skōr
, Dan. & Sw.
sko
, Goth.
skōhs
; of unknown origin.]
1.
A covering for the human foot, usually made of leather, having a thick and somewhat stiff sole and a lighter top. It differs from a boot on not extending so far up the leg.
Your hose should be ungartered, . . . your
shoe
untied.
Shakespeare
Spare none but such as go in clouted
shoon
.
Shakespeare
2.
Anything resembling a shoe in form, position, or use.
Specifically:
(a)
A plate or rim of iron nailed to the hoof of an animal to defend it from injury.
(b)
A band of iron or steel, or a ship of wood, fastened to the bottom of the runner of a sleigh, or any vehicle which slides on the snow.
(c)
A drag, or sliding piece of wood or iron, placed under the wheel of a loaded vehicle, to retard its motion in going down a hill.
(d)
The part of an automobile or railroad car brake which presses upon the wheel to retard its motion.
(e)
(Arch.)
A trough-shaped or spout-shaped member, put at the bottom of the water leader coming from the eaves gutter, so as to throw the water off from the building.
(f)
(Milling.)
The trough or spout for conveying the grain from the hopper to the eye of the millstone.
(g)
An inclined trough in an ore-crushing mill.
(h)
An iron socket or plate to take the thrust of a strut or rafter.
(i)
An iron socket to protect the point of a wooden pile.
(j)
(Mach.)
A plate, or notched piece, interposed between a moving part and the stationary part on which it bears, to take the wear and afford means of adjustment; – called also
slipper
, and
gib
.
☞ Shoe is often used adjectively, or in composition; as, shoe buckle, or shoe-buckle; shoe latchet, or shoe-latchet; shoe leathet, or shoe-leather; shoe string, shoe-string, or shoestring.
Shoe of an anchor
.
(Naut.)
(a)
A small block of wood, convex on the back, with a hole to receive the point of the anchor fluke, – used to prevent the anchor from tearing the planks of the vessel when raised or lowered.
(b)
A broad, triangular piece of plank placed upon the fluke to give it a better hold in soft ground.
–
Shoe block
(Naut.)
,
a block with two sheaves, one above the other, and at right angles to each other.
–
Shoe bolt
,
a bolt with a flaring head, for fastening shoes on sleigh runners.
–
Shoe pac
,
a kind of moccasin. See
Pac
.
–
Shoe stone
,
a sharpening stone used by shoemakers and other workers in leather.

,
Noun.
plu.
shoes.
1. A covering for the foot, usually of lether, composed of a thick species for the sole, and a thinner kind for the vamp and quarthers. Shoes for ladies often have some kind of cloth for the vamp and quarters.
2. A plate or rim of iron nailed to the hoof of a horse to defend it from injury; also, a plate of iron for for an ox's hoof, one for each division of the hoof. Oxen are shod in New England, sometimes to defend the hoof from injury in stony places, more generally to enable them to wald on ice, in which case the shoes are armed with sharp points. This is called calking.
3. The plate of iron which is nailed to the bottom of the runner of a sleigh, or any vehicle that slides on snow in the winter.
4. A piece of timber fastened with pins to the bottom of the runners of a sled, to prevent them from wearing.
5. Something in form of a shoe.
6. A cover for defense. 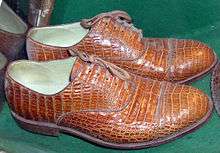 protective covering for the foot
piece of metal designed to be attached to a horse’s foot — see horseshoe
something resembling a shoe (e.g. brake shoe)