(ga̤l)
,
Noun.
[OE.
galle
,
gal
, AS.
gealla
; akin to D.
gal
, OS. & OHG.
galla
, Icel.
gall
, SW.
galla
, Dan.
galde
, L.
fel
, Gr. [GREEK], and prob. to E.
yellow
. √49. See
Yellow
, and cf.
Choler
]
1.
(Physiol.)
The bitter, alkaline, viscid fluid found in the gall bladder, beneath the liver. It consists of the secretion of the liver, or bile, mixed with that of the mucous membrane of the gall bladder.
2.
The gall bladder.
3.
Anything extremely bitter; bitterness; rancor.
He hath . . . compassed me with
gall
and travail.
Lam. iii. 5.
Comedy diverted without
gall
.
Dryden.
4.
Impudence; brazen assurance.
[Slang]
Gall bladder
(Anat.)
,
the membranous sac, in which the bile, or gall, is stored up, as secreted by the liver; the cholecystis. See Illust. of Digestive apparatus.
–
Gall duct
,
a duct which conveys bile, as the cystic duct, or the hepatic duct.
–
Gall sickness
,
a remitting bilious fever in the Netherlands.
Dunglison.
–
Gall of the earth
(Bot.)
,
an herbaceous composite plant with variously lobed and cleft leaves, usually the
Prenanthes serpentaria
.

(ga̤l)
,
Noun.
[F.
galle
, noix de
galle
, fr. L.
galla
.]
(Zool.)
An excrescence of any form produced on any part of a plant by insects or their larvae. They are most commonly caused by small Hymenoptera and Diptera which puncture the bark and lay their eggs in the wounds. The larvae live within the galls. Some galls are due to aphids, mites, etc. See
Gallnut
.
☞ The galls, or gallnuts, of commerce are produced by insects of the genus
Cynips
, chiefly on an oak (
Quercus infectoria
syn.
Quercus Lusitanica
) of Western Asia and Southern Europe. They contain much tannin, and are used in the manufacture of that article and for making ink and a black dye, as well as in medicine.
Gall insect
(Zool.)
,
any insect that produces galls.
–
Gall midge
(Zool.)
,
any small dipterous insect that produces galls.
–
Gall oak
,
the oak (
Quercus infectoria
) which yields the galls of commerce.
–
Gall of glass
,
the neutral salt skimmed off from the surface of melted crown glass;- called also
glass gall
and
sandiver
.
Ure.
–
Gall wasp
.
(Zool.)
See
Gallfly
.

,
Verb.
T.
(Dyeing)
To impregnate with a decoction of gallnuts.
Ure.

,
Verb.
T.
[
imp. & p. p.
Galled
(ga̤ld)
;
p. pr. & vb. n.
Galling
.]
[OE.
gallen
; cf. F.
galer
to scratch, rub,
gale
scurf, scab, G.
galle
a disease in horses’ feet, an excrescence under the tongue of horses; of uncertain origin. Cf.
Gall
gallnut.]
1.
To fret and wear away by friction; to hurt or break the skin of by rubbing; to chafe; to injure the surface of by attrition;
as, a saddle
galls
the back of a horse; to
gall
a mast or a cable.
I am loth to
gall
a new-healed wound.
Shakespeare
2.
To fret; to vex;
as, to be
galled
by sarcasm
.
They that are most
galled
with my folly,
They most must laugh.
Shakespeare
3.
To injure; to harass; to annoy;
as, the troops were
galled
by the shot of the enemy
.
In our wars against the French of old, we used to
gall
them with our longbows, at a greater distance than they could shoot their arrows.
Addison.

,
Noun.
A wound in the skin made by rubbing.

,
Noun.
[Gr. probably from its color.]
1.
In the animal economy, the bile, a bitter, a yellowish green fluid, secreted in the glandular substance of the liver. It is glutinous or imperfectly fluid, like oil.
2.
Any thing extremely bitter.
3.
Rancor; malignity.
4.
Anger; bitterness of mind.

From Old Irish gall ‎(“foreigner”), from Latin Gallus ‎(“a Gaul”), from a native Celtic name, the Gauls being the first strangers to visit or be visited by the Irish in Pre-Roman and Roman times. Compare Proto-Celtic *gallos (whence Welsh gal ‎(“enemy, foe”)).

to trouble or bother
to harass, harry
to chafe
to exasperate
to cause pitting on a surface 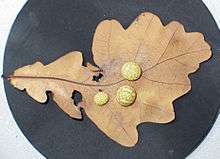 Galls on a dried leaf.

blister or tumor-like growth found on the surface of plants