,
Noun.
1.
A small horse.
Tusser.
2.
A woman; – used in contempt.
Burton.
3.
A morsel; a bit.
Halliwell.
4.
[OE.; cf. Icel.
titter
a tit or small bird. The word probably meant originally, something small, and is perhaps the same as
teat
. Cf.
Titmouse
,
Tittle
.]
(Zool.)
(a)
Any one of numerous species of small singing birds belonging to the families
Paridae
and
Leiotrichidae
; a titmouse.
(b)
The European meadow pipit; a titlark.
Ground tit
.
(Zool.)
See
Wren tit
, under
Wren
.
–
Hill tit
(Zool.)
,
any one of numerous species of Asiatic singing birds belonging to
Siva
,
Milna
, and allied genera.
–
Tit babbler
(Zool.)
,
any one of several species of small East Indian and Asiatic timaline birds of the genus
Trichastoma
.
–
Tit for tat
.
[Probably for
tip for tap
. See
Tip
a slight blow.]
An equivalent; retaliation.
–
Tit thrush
(Zool.)
,
any one of numerous species of Asiatic and East Indian birds belonging to
Suthora
and allied genera. In some respects they are intermediate between the thrushes and titmice.

,
Noun.
The projecting part of the female breast; the dug of a beast; the pap of a woman; the nipple. It consists of an elastic erectile substance, embracing the lactiferous ducts, which terminate on its surface, and thus serves to convey milk to the young of animals. 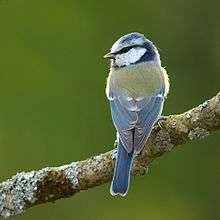 From Old Frisian *tit, from Proto-Germanic *tittaz. More at tit.