,
Noun.
[OE.
stomak
, F.
estomac
, L.
stomachus
, fr. Gr.
στόμαχοσ
stomach, throat, gullet, fr.
στόμα
a mouth, any outlet or entrance.]
1.
(Anat.)
An enlargement, or series of enlargements, in the anterior part of the alimentary canal, in which food is digested; any cavity in which digestion takes place in an animal; a digestive cavity. See
Digestion
, and
Gastric juice
, under
Gastric
.
2.
The desire for food caused by hunger; appetite;
as, a good
stomach
for roast beef
.
Shak.
3.
Hence appetite in general; inclination; desire.
He which hath no
stomach
to this fight,
Let him depart.
Shakespeare
4.
Violence of temper; anger; sullenness; resentment; willful obstinacy; stubbornness.
[Obs.]
Stern was his look, and full of
stomach
vain.
Spenser.
This sort of crying proceeding from pride, obstinacy, and
stomach
, the will, where the fault lies, must be bent.
Locke.
5.
Pride; haughtiness; arrogance.
[Obs.]
He was a man
Of an unbounded
stomach
.
Shakespeare
Stomach pump
(Med.)
,
a small pump or syringe with a flexible tube, for drawing liquids from the stomach, or for injecting them into it.
–
Stomach tube
(Med.)
,
a long flexible tube for introduction into the stomach.
–
Stomach worm
(Zool.)
,
the common roundworm (
Ascaris lumbricoides
) found in the human intestine, and rarely in the stomach.

,
Noun.
[L.]
1.
In animal bodies, a membranous receptacle, the organ of digestion, in which food is prepared for entering into the several parts of the body for its nourishment.
2.
Appetite; the desire of food caused by hunger; as a good stomach for roast beef. [A popular use of the word.]
3.
Inclination; liking.
He which hath no stomach to this fight, let him depart--
4.
Anger; violence of temper.
Stern was his look, and full of stomach vain.
5.
Sullenness; resentment; willful obstinacy; stubbornness.
This sort of crying proceeding from pride, obstinacy and stomach, the will, where the fault lies, must be bent.
6.
Pride; haughtiness.
He was a man of an unbounded stomach, ever ranking himself with princes.
[Note. This word in all the foregoing senses, except the first, is nearly obsolete or inelegant.]

,
Verb.
T.
[L.]
1.
To resent; to remember with anger.
The lion began to show his teeth, and to stomach the affront.
This sense is not used in America, as far as my observation extends. In America, at least in New England, the sense is,
2.
To brook; to bear without open resentment or without opposition. [Not elegant.] 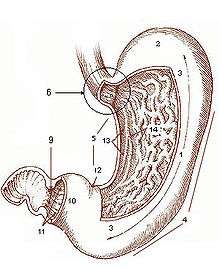 to tolerate or accept something