(ôr′gan)
,
Noun.
[L.
organum
, Gr.
ὄργανον
; akin to
ἔργον
work, and E.
work
: cf. F.
organe
. See
Work
, and cf.
Orgue
,
Orgy
.]
1.
An instrument or medium by which some important action is performed, or an important end accomplished;
as, legislatures, courts, armies, taxgatherers, etc., are
organs
of government
.
2.
(Biol.)
A natural part or structure in an animal or a plant, capable of performing some special action (termed its function), which is essential to the life or well-being of the whole;
as, the heart, lungs, etc., are
organs
of animals; the root, stem, foliage, etc., are
organs
of plants
.
☞ In animals the organs are generally made up of several tissues, one of which usually predominates, and determines the principal function of the organ. Groups of organs constitute a
system
. See
System
.
3.
A component part performing an essential office in the working of any complex machine;
as, the cylinder, valves, crank, etc., are
organs
of the steam engine
.
5.
[Cf. AS.
organ
, fr. L.
organum
.]
(Mus.)
A wind instrument containing numerous pipes of various dimensions and kinds, which are filled with wind from a bellows, and played upon by means of keys similar to those of a piano, and sometimes by foot keys or pedals; – formerly used in the plural, each pipe being considered an organ.
The deep, majestic, solemn
organs
blow.
Pope.
☞ Chaucer used the form orgon as a plural.

The merry
orgon
. . . that in the church goon [go].
Barrel organ
,
Choir organ
,
Great organ
,
etc. See under
Barrel
,
Choir
, etc.
–
Cabinet organ
(Mus.)
,
an organ of small size, as for a chapel or for domestic use; a reed organ.
–
Organ bird
(Zool.)
,
a Tasmanian crow shrike (
Gymnorhina organicum
). It utters discordant notes like those of a hand organ out of tune.
–
Organ fish
(Zool.)
,
the drumfish.
–
Organ gun
.
(Mil.)
Same as
Orgue
(b)
.
–
Organ harmonium
(Mus.)
,
an harmonium of large capacity and power.
–
Organ of Corti
(Anat.)
,
a complicated structure in the cochlea of the ear, including the auditory hair cells, the rods or fibers of Corti, the membrane of Corti, etc. See Note under
Ear
.
–
Organ pipe
.
See
Pipe
,
Noun.
, 1.
–
Organ-pipe coral
.
(Zool.)
See
Tubipora
.
–
Organ point
(Mus.)
,
a passage in which the tonic or dominant is sustained continuously by one part, while the other parts move.

,
Verb.
T.
To supply with an organ or organs; to fit with organs; to organize.
[Obs.]
Thou art elemented and
organed
for other apprehensions.
Bp. Mannyngham. 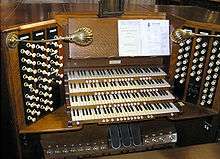 The console of a pipe organ (musical instrument).

part of an organism
body of an organization
musical instrument
official magazine, newsletter, or similar publication
species of cactus
words derived from "organ" and meaning "****"