(ēr)
,
Noun.
[AS.
eáre
; akin to OFries.
áre
,
ár
, OS.
ōra
, D.
oor
, OHG.
ōra
, G.
ohr
, Icel.
eyra
, Sw.
öra
, Dan.
öre
, Goth.
auso
, L.
auris
, Lith.
ausis
, Russ.
ukho
, Gr.
οὖς
; cf. L.
audire
to hear, Gr.
ἀίειν
, Skr.
av
to favor , protect. Cf.
Auricle
,
Orillon
.]
1.
The organ of hearing; the external ear.
☞ In man and the higher vertebrates, the organ of hearing is very complicated, and is divisible into three parts: the external ear, which includes the
pinna
or
auricle
and
meatus
or external opening; the middle ear, drum, or
tympanum
; and the internal ear, or
labyrinth
. The middle ear is a cavity connected by the
Eustachian tube
with the pharynx, separated from the opening of the external ear by the
tympanic membrane
, and containing a chain of three small bones, or ossicles, named
malleus
,
incus
, and
stapes
, which connect this membrane with the internal ear. The essential part of the internal ear where the fibers of the auditory nerve terminate, is the
membranous labyrinth
, a complicated system of sacs and tubes filled with a fluid (the endolymph), and lodged in a cavity, called the
bony labyrinth
, in the periotic bone. The membranous labyrinth does not completely fill the bony labyrinth, but is partially suspended in it in a fluid (the perilymph). The bony labyrinth consists of a central cavity, the
vestibule
, into which three
semicircular canals
and the canal of the
cochlea
(spirally coiled in mammals) open. The vestibular portion of the membranous labyrinth consists of two sacs, the
utriculus
and
sacculus
, connected by a narrow tube, into the former of which three membranous semicircular canals open, while the latter is connected with a membranous tube in the cochlea containing the
organ of Corti
. By the help of the external ear the sonorous vibrations of the air are concentrated upon the tympanic membrane and set it vibrating, the chain of bones in the middle ear transmits these vibrations to the internal ear, where they cause certain delicate structures in the organ of Corti, and other parts of the membranous labyrinth, to stimulate the fibers of the auditory nerve to transmit sonorous impulses to the brain.
2.
The sense of hearing; the perception of sounds; the power of discriminating between different tones;
as, a nice
ear
for music
; – in the singular only.
Songs . . . not all ungrateful to thine
ear
.
Tennyson.
3.
That which resembles in shape or position the ear of an animal; any prominence or projection on an object, – usually one for support or attachment; a lug; a handle;
as, the
ears
of a tub, a skillet, or dish
. The ears of a boat are outside kneepieces near the bow. See Illust. of
Bell
.
4.
(Arch.)
(a)
Same as
Acroterium
.
(b)
Same as
Crossette
.
5.
Privilege of being kindly heard; favor; attention.
Dionysius . . . would give no
ear
to his suit.
Bacon.
Friends, Romans, countrymen, lend me your
ears
.
Shakespeare
About the ears
,
in close proximity to; near at hand.
–
By the ears
,
in close contest; as, to set by the ears; to fall together by the ears; to be by the ears.
–
Button ear
(in dogs),
an ear which falls forward and completely hides the inside.
–
Ear finger
,
the little finger.
–
Ear of Dionysius
,
a kind of ear trumpet with a flexible tube; – named from the Sicilian tyrant, who constructed a device to overhear the prisoners in his dungeons.
–
Ear sand
(Anat.)
,
otoliths. See
Otolith
.
–
Ear snail
(Zoöl.)
,
any snail of the genus
Auricula
and allied genera.
–
Ear stones
(Anat.)
,
otoliths. See
Otolith
.
–
Ear trumpet
,
an instrument to aid in hearing. It consists of a tube broad at the outer end, and narrowing to a slender extremity which enters the ear, thus collecting and intensifying sounds so as to assist the hearing of a partially deaf person.
–
Ear vesicle
(Zoöl.)
,
a simple auditory organ, occurring in many worms, mollusks, etc. It consists of a small sac containing a fluid and one or more solid concretions or otocysts.
–
Rose ear
(in dogs),
an ear which folds backward and shows part of the inside.
–
To give ear to
,
to listen to; to heed, as advice or one advising.
“Give ear unto my song.”
Goldsmith.
–
To have one’s ear
,
to be listened to with favor.
–
Up to the ears
,
deeply submerged; almost overwhelmed; as, to be in trouble up to one's ears.
[Colloq.]

,
Verb.
I.
To put forth ears in growing; to form ears, as grain;
as, this corn
ears
well
.

,
Noun.
[L. auris, whence auricula; audio.]
1.
The organ of hearing; the organ by which sound is perceived; and in general, both the external and internal part is understood by the term. The external ear is a cartilaginous funnel, attached, by ligaments and muscles, to the temporal bone.
2.
The sense of hearing, or rather the power of distinguishing sounds and judging of harmony; the power of nice perception of the differences of sound, or of consonances and dissonances. She has a delicate ear for music, or a good ear.
3.
In the plural, the head or person.
It is better to pass over an affront from one scoundrel,than to draw a herd about one's ears.
4.
The top, or highest part.
The cavalier was up to the ears in love.
5.
A favorable hearing; attention; heed; regard. Give no ear to flattery.
I cried to God--and he gave ear to me. Ps.77.
He could not gain the prince's ear.
6.
Disposition to like or dislike what is heard; opinion; judgment; taste.
He laid his sense closer--according to the style and ear of those times.
7.
Any part of a thing resembling an ear; a projecting part from the side of any thing; as the ears of a vessel used as handles.
8.
The spike of corn; that part of certain plants which contains the flowers and seeds; as an ear of wheat or maiz.
To be by the ears,------------------
To fall together by the ears,------- to fight or scuffle; to
To go together by the ears,--------- quarrel.
To set by the ears, to make strife; to cause to quarrel. 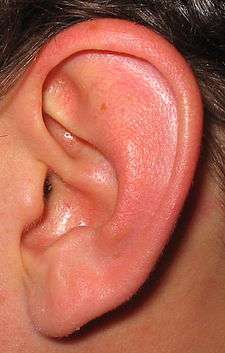 fruiting body of a grain plant