,
Noun.
[D.
wafel
. See
Wafer
.]
1.
A thin cake baked and then rolled; a wafer.
2.
A soft indented cake cooked in a waffle iron.
Waffle iron
,
an iron utensil or mold made in two parts shutting together, – used for cooking waffles over a fire. 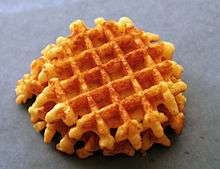 From the Scots waffle, "to waver, to flutter", a variation of the Scots waff ("to flutter, to wave", related to wave), with the suffix -le added. Alternatively, perhaps derived from waff, an imitation of a dog's (unintelligible and thus meaningless) yelp (cf woof). Also note Old English wæflian ‎(“to talk foolishly”).

speech or writing that is vague

Borrowed into American English from Dutch wafel, from Middle Dutch wafel, wavel, from Old Dutch [Term?], derived from the verb at hand in Dutch weven, a cognate and synonym of English weave (due to the pastry’s honeycomb pattern). This American borrowing may have been reinforced by German Waffel, an earlier borrowing from the same Dutch source. An even earlier Old French borrowing walfre is the origin of French gaufre and English wafer.