Vouchsafed or sought.
Milton.
None
of their productions are extant.
Blair.
2.
No; not any; – used adjectively before a vowel, in old style;
as, thou shalt have
none
assurance of thy life
.
None of
,
not at all; not; nothing of; – used emphatically.
“They knew that I was none of the register that entered their admissions in the universities.”
Fuller.
–
None-so-pretty
(Bot.)
,
the
Saxifraga umbrosa
. See
London pride
(a)
, under
London
.

,
Adj.
1.
Not one; used of persons or things.
There is none that doeth good; no, not one. Psalm 14.
2.
Not any; not a part; not the least portion.
Six days shall ye gather it, but on the seventh day, which is the sabbath, in it there shall be none. Exodus 16.
3.
It was formerly used before nouns; as, thou shalt have none assurance of thy life. This use is obsolete; we now use no; thou shalt have no assurance. This is none other but the house of God; we now say, no other.
4.
It is used as a substitute, the noun being omitted. He walketh through dry places, seeking rest and finding none; that is, no rest. Matthew 7.
5.
In the following phrase, it is used for nothing, or no concern. Israel would none of me, that is, Israel would not listen to me at all; they would have no concern with me; they utterly rejected my counsels.
6.
As a substitute, none has a plural signification.
Terms of peace were none vouchsafed. 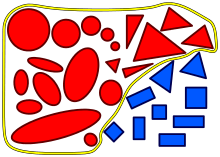 In this picture, none of the blue shapes are inside the yellow boundary.

Although uncountable nouns require none to be conjugated with a singular verb, e.g., None of this meat tastes right, the pronoun can be either singular or plural in most other cases, e.g., Fifty people applied for the position, but none were accepted., and None was qualified.

However, where the given or implied context is clearly singular or plural, then a matching verb makes better sense:

not any person; no one, nobody
not any