,
Verb.
T.
[OE.
hacchen
,
hetchen
; akin to G.
hecken
, Dan.
hekke
; cf. MHG.
hagen
bull; perh. akin to E.
hatch
a half door, and originally meaning, to produce under a hatch. √12.]
1.
To produce, as young, from an egg or eggs by incubation, or by artificial heat; to produce young from (eggs);
as, the young when
hatched
.
Paley.
As the partridge sitteth on eggs, and
hatcheth
them not.
Jer. xvii. 11.
For the hens do not sit upon the eggs; but by keeping them in a certain equal heat they [the husbandmen] bring life into them and
hatch
them.
Robynson (More’s Utopia).
2.
To contrive or plot; to form by meditation, and bring into being; to originate and produce; to concoct;
as, to
hatch
mischief; to
hatch
heresy.
Hooker.
Fancies
hatched

,
Verb.
I.
To produce young; – said of eggs; to come forth from the egg; – said of the young of birds, fishes, insects, etc.

,
Noun.
1.
The act of hatching.
2.
Development; disclosure; discovery.
Shak.
3.
The chickens produced at once or by one incubation; a brood.

,
Noun.
[OE.
hacche
, AS.
hæc
, cf.
haca
the bar of a door, D.
hek
gate, Sw.
häck
coop, rack, Dan.
hekke
manger, rack. Prob. akin to E.
hook
, and first used of something made of pieces fastened together. Cf.
Heck
,
Hack
a frame.]
1.
A door with an opening over it; a half door, sometimes set with spikes on the upper edge.
In at the window, or else o'er the
hatch
.
Shakespeare
2.
A frame or weir in a river, for catching fish.
3.
A flood gate; a sluice gate.
Ainsworth.
4.
A bedstead.
[Scot.]
Sir W. Scott.
5.
An opening in the deck of a vessel or floor of a warehouse which serves as a passageway or hoistway; a hatchway; also; a cover or door, or one of the covers used in closing such an opening.
6.
(Mining)
An opening into, or in search of, a mine.
Booby hatch
,
Buttery hatch
,
Companion hatch
, etc.
See under
Booby
,
Buttery
, etc.
–
To batten down the hatches
(Naut.)
,
to lay tarpaulins over them, and secure them with battens.
–
To be under hatches
,
to be confined below in a vessel; to be under arrest, or in slavery, distress, etc.

,
Verb.
T.
To close with a hatch or hatches.
'T were not amiss to keep our door
hatched
.
Shakespeare

, v.t.
1.
To produce young from eggs by incubation, or by artificial heat. In Egypt, chickens are hatched by artificial heat.
The partridge sitteth on eggs and hatcheth them not. Jer. 17.
2.
To contrive or plot; to form by meditation, and bring into being; to originate and produce in silence; as, to hatch mischief; to hatch heresy.

,
Verb.
T.
To shade by lines in drawing and engraving.
Those hatching strokes of the pencil.
1.
To steep.

,
Verb.
I.
To produce young; to bring the young to maturity. Eggs will not hatch without a due degree and continuance of heat.

,
Noun.
A brood; as many chickens as are produced at once, or by one incubation.
1.
The act of exclusion from the egg.
2.
Disclosure; discovery.

, or HATCHES, n.
1.
Properly, the grate or frame of cross-bars laid over the opening in a ship's deck, now called hatch-bars. The lid or cover of a hatchway is also called hatches.
2.
The opening in a ship's deck, or the passage from one deck to another, the name of the grate itself being used for the opening; but this is more properly called the hatchway.
3.
A half-door, or door with an opening over it.
4.
Floodgates.
5.
In Cornwall, Eng. openings into mines, or in search of them.
6.
To be under the hatches, to be confined, or to be in distress, depression or slavery.

to emerge from an egg
of an egg, to break open
to incubate eggs
to devise 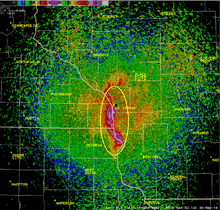 A radar image of a mayfly hatch on the Mississippi River, 29 May 2010

to shade an area — see crosshatch