,
Adj.
[L.
uniformis
;
unus
one +
forma
from: cf. F.
uniforme
.]
1.
Having always the same form, manner, or degree; not varying or variable; unchanging; consistent; equable; homogenous;
as, the dress of the Asiatics has been
uniform
from early ages; the temperature is
uniform
; a stratum of
uniform
clay.
Whewell.
2.
Of the same form with others; agreeing with each other; conforming to one rule or mode; consonant.
The only doubt is . . . how far churches are bound to be
uniform
in their ceremonies.
Hooker.
Uniform matter
,
that which is all of the same kind and texture; homogenous matter.
–
Uniform motion
,
the motion of a body when it passes over equal spaces in equal times; equable motion.
Hutton.

,
Noun.
[F.
uniforme
. See
Uniform
,
Adj.
]
A dress of a particular style or fashion worn by persons in the same service or order by means of which they have a distinctive appearance;
as, the
uniform
of the artillery, of the police, of the Freemasons, etc
.
There are many things which, a soldier will do in his plain clothes which he scorns to do in his
uniform
.
F. W. Robertson.
In full uniform
(Mil.)
,
wearing the whole of the prescribed uniform, with ornaments, badges of rank, sash, side arms, etc.
–
Uniform sword
,
an officer’s sword of the regulation pattern prescribed for the army or navy.

a. [L. uniformis; unus, one, and forma, form.]
1.
Having always the same form or manner; not variable. Thus we say, the dress of the Asiatics is uniform, or has been uniform from early ages. so we say, it is the uty of a christian to observe a uniform course of piety and religion.
2.
Consistent with itself; not different; as, one's opinions on a particular subject have been uniform.
3.
Of the same form with others; consonant; agreeing with each other; conforming to one rule or mode.
How far churches are bound to be uniform in their ceremonies, is doubted.
4.
Having the same degree or state; as uniform temperature.
Uniform motion. the motion of a body is uniform, when it passes over equal spaces in equal times.
Uniform matter, is that which is all of the same kind and texture. 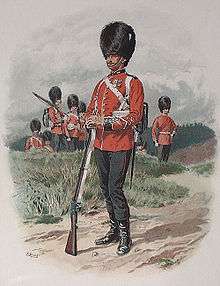 The uniform worn by a soldier from the Luxembourg Army