,
Noun.
[OE.
soile
, F.
sol
, fr. L.
solum
bottom, soil; but the word has probably been influenced in form by
soil
a miry place. Cf.
Saloon
,
Soil
a miry place,
Sole
of the foot.]
1.
The upper stratum of the earth; the mold, or that compound substance which furnishes nutriment to plants, or which is particularly adapted to support and nourish them.
2.
Land; country.
Must I thus leave thee, Paradise? thus leave
Thee, native
soil
?
Milton.
3.
Dung; faeces; compost; manure;
as, night
soil
.
Improve land by dung and other sort of
soils
.
Mortimer.
Soil pipe
,
a pipe or drain for carrying off night soil.

,
Verb.
T.
To enrich with soil or muck; to manure.
Men . . .
soil
their ground, not that they love the dirt, but that they expect a crop.
South.

,
Noun.
[OF.
soil
,
souil
, F.
souille
, from OF.
soillier
, F.
souiller
. See
Soil
to make dirty.]
A marshy or miry place to which a hunted boar resorts for refuge; hence, a wet place, stream, or tract of water, sought for by other game, as deer.
As deer, being stuck, fly through many
soils
,
Yet still the shaft sticks fast.
Marston.
To take soil
,
to run into the mire or water; hence, to take refuge or shelter.
O, sir, have you
taken soil
here? It is well a man may reach you after three hours’ running.
B. Jonson.

,
Verb.
I.
To become soiled;
as, light colors
soil
sooner than dark ones
.

, v.t.
1.
To make dirty on the surface; to foul; to dirt; to stain; to defile; to tarnish; to sull; as, to soil a garment with dust. Out wonted ornaments now soil'd and stain'd.
2.
To cover or tinge with any thing extraneous; as, to soil the earth with blood.
3.
To dung; to manure. 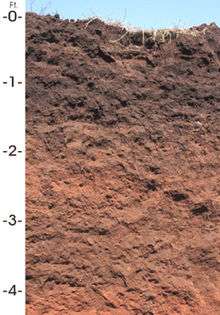 to make dirty
to defecate into one's clothing — see soil oneself
to make invalid, to ruin