(shĕd)
,
Noun.
[The same word as
shade
. See
Shade
.]
1.
A slight or temporary structure built to shade or shelter something; a structure often open in front; an outbuilding; a hut;
as, a wagon
shed
; a wood
shed
.
The first Aletes born in lowly
shed
.
Fairfax.
Sheds
of reeds which summer’s heat repel.
Sandys.

Their utmost bounty on thy head.
Wordsworth.
3.
To let fall; to throw off, as a natural covering of hair, feathers, shell; to cast;
as, fowls
shed
their feathers; serpents
shed
their skins; trees
shed
leaves
.
4.
To cause to flow off without penetrating;
as, a tight roof, or covering of oiled cloth,
sheeds
water
.
5.
To sprinkle; to intersperse; to cover.
[R.]
“Her hair . . . is shed with gray.”
B. Jonson.
6.
(Weaving)
To divide, as the warp threads, so as to form a shed, or passageway, for the shuttle.

,
Verb.
I.
1.
To fall in drops; to pour.
[Obs.]
Such a rain down from the welkin
shadde
.
Chaucer.
2.
To let fall the parts, as seeds or fruit; to throw off a covering or envelope.
White oats are apt to
shed
most as they lie, and black as they stand.
Mortimer.

,
Noun.
1.
A parting; a separation; a division.
[Obs. or Prov. Eng.]
They say also that the manner of making the
shed
of newwedded wives' hair with the iron head of a javelin came up then likewise.
Sir T. North.
2.
The act of shedding or spilling; – used only in composition, as in bloodshed.
3.
That which parts, divides, or sheds; – used in composition, as in watershed.
4.
(Weaving)
The passageway between the threads of the warp through which the shuttle is thrown, having a sloping top and bottom made by raising and lowering the alternate threads.

,
Verb.
T.
pret. and pp. shed.
1. To pour out; to effuse; to spill; to suffer to flow out; as, to shed tears; to shed blood. The sun sheds light on the earth; the stars shed a more feeble light.
This is my blood of the New Testament, which is shed for many for the remission of sins. Matt. 26.
2. To let fall; to cast; as, the trees shed their leaves on autumn; fowls shed their fethers; and serpents shed their skin.
3. To scatter to emit; to throw off; to diffuse; as, flowers shed their sweets of fragrance.

,
Verb.
I.
To let fall its parts.
White oats are apt to shed most as they lie, and black as they stand.

to part or divide
to cast off, to let fall, be divested of
to pour; to make flow
to allow to flow or fall
to radiate, cast, give off 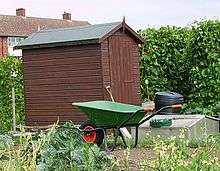 A typical wooden shed on an allotment in Britain