(grĭt)
,
Verb.
I.
To give forth a grating sound, as sand under the feet; to grate; to grind.
The sanded floor that
grits
beneath the tread.
Goldsmith. 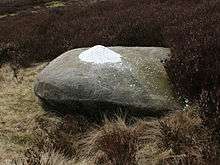 a pile of grit set out for grouse, which the birds swallow to assist in digesting heather

to clench
to cover with grit

Canadian. From the Clear Grits.