(flour)
,
Noun.
[F.
fleur de farine
the flower (i.e., the best) of meal, cf. Sp.
flor de la harina
superfine flour, Icel.
flür
flower, flour. See
Flower
.]
The finely ground meal of wheat, or of any other grain; especially, the finer part of meal separated by bolting; hence, the fine and soft powder of any substance;
as,
flour
of emery;
flour
of mustard.
Flour bolt
,
in milling, a gauze-covered, revolving, cylindrical frame or reel, for sifting the flour from the refuse contained in the meal yielded by the stones.
–
Flour box
a tin box for scattering flour; a dredging box.
–
Flour dredge
or
Flour dredger
,
a flour box.
–
Flour dresser
,
a mashine for sorting and distributing flour according to grades of fineness.
–
Flour mill
,
a mill for grinding and sifting flour.

,
Noun.
[originally flower; L. flos, floris, from floreo, to flourish.]
The edible part of corn; meal. In the United States, the modern practice is to make a distinction between flour and meal; the word flour being more usually applied to the finer part of meal, separated from the bran, as wheat flour, rye flour. This is a just and useful distinction.

,
Verb.
T.
1.
To grind and bolt; to convert into flour. Wheat used formerly to be sent to market; but now great quantities of it are floured in the interior country.
2.
To sprinkle with flour. 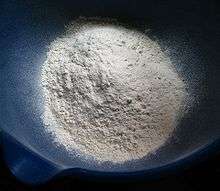 to apply flour to something

Spelled (until about 1830) and meaning "flower" in the sense of flour being the "finest portion of ground grain" (compare French fleur de farine, fine fleur). For more see flower.