,
Noun.
[F.
division
, L.
divisio
, from
dividere
. See
Divide
.]
1.
The act or process of diving anything into parts, or the state of being so divided; separation.
I was overlooked in the
division
of the spoil.
Gibbon.
2.
That which divides or keeps apart; a partition.
3.
The portion separated by the divining of a mass or body; a distinct segment or section.
Communities and
divisions
of men.
Addison.
4.
Disunion; difference in opinion or feeling; discord; variance; alienation.
There was a
division
among the people.
John vii. 43.
5.
Difference of condition; state of distinction; distinction; contrast.
Chaucer.
I will put a
division
between my people and thy people.
Ex. viii. 23.
6.
Separation of the members of a deliberative body, esp. of the Houses of Parliament, to ascertain the vote.
The motion passed without a
division
.
Macaulay.
7.
(Math.)
The process of finding how many times one number or quantity is contained in another; the reverse of multiplication; also, the rule by which the operation is performed.
8.
(Logic)
The separation of a genus into its constituent species.
9.
(Mil.)
(a)
Two or more brigades under the command of a general officer.
(b)
Two companies of infantry maneuvering as one subdivision of a battalion.
(c)
One of the larger districts into which a country is divided for administering military affairs.
10.
(Naut.)
One of the groups into which a fleet is divided.
11.
(Mus.)
A course of notes so running into each other as to form one series or chain, to be sung in one breath to one syllable.
12.
(Rhet.)
The distribution of a discourse into parts; a part so distinguished.
13.
(Biol.)
A grade or rank in classification; a portion of a tribe or of a class; or, in some recent authorities, equivalent to a subkingdom.
Syn. – compartment; section; share; allotment; distribution; separation; partition; disjunction; disconnection; difference; variance; discord; disunion.

,
Noun.
S as z. [L. See Divide.]
1.
The act of dividing or separating into parts, any entire body.
2.
The state of being divided.
3.
That which divides or separates; that which keeps apart; partition.
4.
The part separated from the rest by a partition or line, real or imaginary; as the divisions of a field.
5.
A separate body of men; as, communities and divisions of men.
6.
A part or distinct portion; as the divisions of a discourse.
7.
A part of an army or militia; a body consisting of a certain number of brigades usually two, and commanded by a major general. But the term is often applied to other bodies or portions of an army, as to a brigade, a squadron or a platoon.
8.
A part of a fleet, or a select number of ships under a commander, and distinguished by a particular flag or pendant.
9.
Disunion; discord; variance; difference.
There was a division among the people. John 7.
10.
Space between the notes of music, or the dividing of the tones.
11.
Distinction.
I will put a division between my people and thy people. Exodus 8.
12.
The separation of voters in a legislative house.
13.
In arithmetic, the dividing of a number or quantity into any parts assigned; or the rule by which is found how many times one number is contained in another. 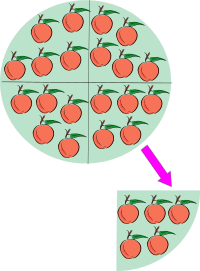