,
Noun.
[F.
arc
, L.
arcus
bow, arc. See
Arch
,
Noun.
]
1.
(Geom.)
A portion of a curved line;
as, the
arc
of a circle or of an ellipse
.
2.
A curvature in the shape of a circular arc or an arch;
as, the colored
arc
(the rainbow); the
arc
of Hadley’s quadrant.
3.
An arch.
[Obs.]
Statues and trophies, and triumphal
arcs
.
Milton.
4.
The apparent arc described, above or below the horizon, by the sun or other celestial body. The diurnal arc is described during the daytime, the nocturnal arc during the night.
Electric arc
,
Voltaic arc
.
See under
Voltaic
.

,
Noun.
[L. arcus, a bow, vault or arch; arcuo, to bend; Gr. beginning, origin; to begin, to be the author or chief. The Greek word has a different application, but is probably from the same root as arcus, from the sense of springing or stretching, shooting up, rising, which gives the sense of a vault, or bow, as well as of chief or head. Heb. to weave; to desire, or long for, to ascend. Gr.; L. fragro; and the sense of arch is from stretching upwards, ascending. From arc or arch comes the sense of bending, deviating and cunning.]
In geometry, any part of the circumference of a circle, or curved line, lying from one point to another; a segment, or part of a circle, not more than a semicircle.

arc ‎(third-person singular simple present arcs, present participle arcing or arcking or arking, simple past and past participle arced or arcked or arked)

From Old Provençal arc, from Latin arcus, from Proto-Indo-European *h₂erkʷo-.

The original form of the word was orca.

From Latin arcus, from Proto-Indo-European *h₂erkʷo-. 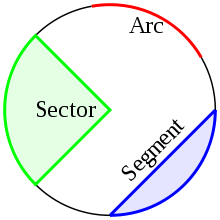 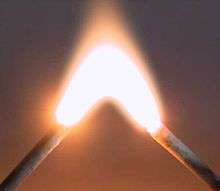 An electric arc between two nails.