,
Noun.
[OE.
wod
, AS.
wād
; akin to D.
weede
, G.
waid
, OHG.
weit
, Dan.
vaid
,
veid
, Sw.
veide
, L.
vitrum
.]
[Written also
wad
, and
wade
.]
1.
(Bot.)
An herbaceous cruciferous plant (
Isatis tinctoria
) of the family
Cruciferae
(syn.
Brassicaceae
). It was formerly cultivated for the blue coloring matter derived from its leaves. See
isatin
.
2.
A blue dyestuff, or coloring matter, consisting of the powdered and fermented leaves of the
Isatis tinctoria
. It is now superseded by indigo, but is somewhat used with indigo as a ferment in dyeing.
Their bodies . . . painted with
woad
in sundry figures.
Milton.
Wild woad
(Bot.)
,
the weld (
Reseda luteola
). See
Weld
.
–
Woad mill
,
a mill grinding and preparing woad.

,
Noun.
[G.] A plant of the genus Isatis, cultivated for the use of dyers. The woad blue is a very deep blue, and is the base of many other colors or shades of color. Woad is first bruised in a mill, and then made into balls. It grows wild in France and along the coasts of the Baltic. The term woad is applied to the Reseda, weld or wold, and to the Genista tinctoria or dyers broom. 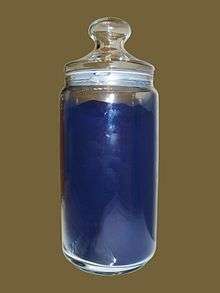 Isatis tinctoria
blue dye made from the plant