,
Noun.
[Originally, a rafter, spar, and fr. Icel.
raptr
a rafter; akin to Dan.
raft
, Prov. G.
raff
a rafter, spar; cf. OHG.
rāfo
,
rāvo
, a beam, rafter, Icel.
rāf
roof. Cf.
Rafter
,
Noun.
]
1.
A collection of logs, boards, pieces of timber, or the like, fastened together, either for their own collective conveyance on the water, or to serve as a support in conveying other things; a float.
2.
A collection of logs, fallen trees, etc. (such as is formed in some Western rivers of the United States), which obstructs navigation.
[U.S.]
3.
[Perhaps akin to
raff
a heap.]
A large collection of people or things taken indiscriminately.
[Slang, U. S.]
“A whole raft of folks.”
W. D. Howells.
Raft bridge
.
(a)
A bridge whose points of support are rafts
.
(b)
A bridge that consists of floating timbers fastened together.
–
Raft duck
.
[The name alludes to its swimming in dense flocks.]
(Zool.)
(a)
The bluebill, or greater scaup duck; – called also
flock duck
. See
Scaup
.
(b)
The redhead.
–
Raft port
(Naut.)
,
a large, square port in a vessel’s side for loading or unloading timber or other bulky articles; a timber or lumber port.

,
Noun.
[Gr. to sew that is, to fasten together, and allied to reeve; or Gr. whence a flooring. See Rafter and Roof.]
An assemblage of boards, planks or pieces of timber fastened together horizontally and floated down a stream; a float.

large but unspecified number of something 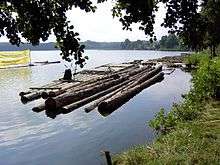