,
Noun.
[OF.
toste
, or
tostée
, toasted bread. See
Toast
,
Verb.
]
1.
Bread dried and browned before a fire, usually in slices; also, a kind of food prepared by putting slices of toasted bread into milk, gravy, etc.
My sober evening let the tankard bless,
With
toast
embrowned, and fragrant nutmeg fraught.
T. Warton.
2.
A lady in honor of whom persons or a company are invited to drink; – so called because toasts were formerly put into the liquor, as a great delicacy.
It now came to the time of Mr. Jones to give a
toast
. . . who could not refrain from mentioning his dear Sophia.
Fielding.
3.
Hence, any person, especially a person of distinction, in honor of whom a health is drunk; hence, also, anything so commemorated; a sentiment, as “The land we live in,” “The day we celebrate,” etc.
Toast rack
,
a small rack or stand for a table, having partitions for holding slices of dry toast.

,
Verb.
T.
[L. tostus.]
1.
To dry and scorch by the heat of a fire; as, to toast bread or cheese. [It is chiefly limited in its application to these two articles.]
2.
To warm thoroughly; as, to toast the feet. [Not much used.]
3.
To name when a health is drank; to drink to the health in honor of; as, to toast a lady. Addison writes 'to toast the health;' a form of expression I believe not now used.

,
Noun.
Bread dried and scorched by the fire; or such bread dipped in melted butter, or in some liquor. Dry toast is bread scorched, or it is scorched bread with butter spread upon it. Soft toast is made by immersing toasted bread in melted butter, and called dipped toast.
1.
A female whose health is drank in honor or respect.
The wise man's passion, and the vain man's toast.
2.
He or that which is named in honor in drinking. 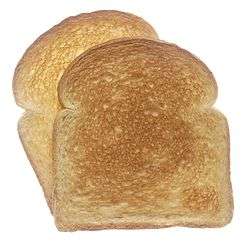