,
Noun.
[AS.
sting
a sting. See
Sting
,
Verb.
T.
]
1.
(Zool.)
Any sharp organ of offense and defense, especially when connected with a poison gland, and adapted to inflict a wound by piercing; as the caudal sting of a scorpion. The sting of a bee or wasp is a modified ovipositor. The caudal sting, or spine, of a sting ray is a modified dorsal fin ray. The term is sometimes applied to the fang of a serpent. See Illust. of
Scorpion
.
2.
(Bot.)
A sharp-pointed hollow hair seated on a gland which secrets an acrid fluid, as in nettles. The points of these hairs usually break off in the wound, and the acrid fluid is pressed into it.
3.
Anything that gives acute pain, bodily or mental;
as, the
stings
of remorse; the
stings
of reproach.
The
sting
of death is sin.
1 Cor. xv. 56.
4.
The thrust of a sting into the flesh; the act of stinging; a wound inflicted by stinging.
“The lurking serpent’s mortal sting.”
Shak.
5.
A goad; incitement.
Shak.
6.
The point of an epigram or other sarcastic saying.
Sting moth
(Zool.)
,
an Australian moth (
Doratifera vulnerans
) whose larva is armed, at each end of the body, with four tubercles bearing powerful stinging organs.
–
Sting ray
.
(Zool.)
See under 6th
Ray
.
–
Sting winkle
(Zool.)
,
a spinose marine univalve shell of the genus Murex, as the European species (
Murex erinaceus
). See Illust. of
Murex
.

,
Verb.
T.
pret. and pp. stung. Stang is obsolete. [G., to stick, to sting. We see that sting, is stick altered in orthography and pronunciation.]
1.
To pierce with the sharp pointed instrument with which certain animals are furnished, such as bees, wasps, scorpions and the like. Bees will seldom sting persons, unless they are first provoked.
2.
To pain acutely; as, the conscience is stung with remorse.
Slander stings the brave.

,
Noun.
1.
A sharp pointed weapon or instrument which certain animals are armed by nature for their defense, and which they thrust from the hinder part of the body to pierce any animal that annoys or provokes them. In most instances, this instrument is a tube, through which a poisonous matter is discharged, which inflames the flesh, and in some instances proves fatal to life.
2.
The thrust of a sting into the flesh. The sting of most insects produces acute pain.
3.
Any thing that gives acute pain. Thus we speak of the stings of remorse; the stings of reproach.
4.
The point in the last verse; as the sting of an epigram.
5.
That which gives the principal pain, or constitutes the principal terror.
The sting of death is sin. 1 Corinthians 15. 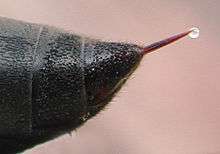 A wasp sting--a pointed portion of an insect

bump on skin after having been stung
bite or sting (by an insect)
pointed portion of an insect or arachnid used for attack — see stinger
sharp, localised pain in epidermis
police operation

to hurt
of an insect: to bite

From the verb stinge

From the verb stinge