,
Noun.
[F.
signe
, L.
signum
; cf. AS.
segen
,
segn
, a sign, standard, banner, also fr. L.
signum
. Cf.
Ensign
,
Resign
,
Seal
a stamp,
Signal
,
Signet
.]
That by which anything is made known or represented; that which furnishes evidence; a mark; a token; an indication; a proof.
Specifically:
(a)
A remarkable event, considered by the ancients as indicating the will of some deity; a prodigy; an omen.
(b)
An event considered by the Jews as indicating the divine will, or as manifesting an interposition of the divine power for some special end; a miracle; a wonder.
Through mighty
signs
and wonders, by the power of the Spirit of God.
Rom. xv. 19.
It shall come to pass, if they will not believe thee, neither hearken to the voice of the first
sign
, that they will believe the voice of the latter
sign
.
Ex. iv. 8.
(c)
Something serving to indicate the existence, or preserve the memory, of a thing; a token; a memorial; a monument.
What time the fire devoured two hundred and fifty men, and they became a
sign
.
Num. xxvi. 10.
(d)
Any symbol or emblem which prefigures, typifles, or represents, an idea; a type; hence, sometimes, a picture.
The holy symbols, or
signs
, are not barely significative; but what they represent is as certainly delivered to us as the symbols themselves.
Brerewood.
Saint George of Merry England, the
sign
of victory.
Spenser.
(e)
A word or a character regarded as the outward manifestation of thought; as, words are the sign of ideas.
(f)
A motion, an action, or a gesture by which a thought is expressed, or a command or a wish made known.
They made
signs
to his father, how he would have him called.
Luke i. 62.
(g)
Hence, one of the gestures of pantomime, or of a language of a signs such as those used by the North American Indians, or those used by the deaf and dumb.
☞ Educaters of the deaf distinguish between natural signs, which serve for communicating ideas, and methodical, or systematic, signs, adapted for the dictation, or the rendering, of written language, word by word; and thus the signs are to be distinguished from the manual alphabet, by which words are spelled on the fingers.
(h)
A military emblem carried on a banner or a standard.
Milton.
(i)
A lettered board, or other conspicuous notice, placed upon or before a building, room, shop, or office to advertise the business there transacted, or the name of the person or firm carrying it on; a publicly displayed token or notice.
The shops were, therefore, distinguished by painted
signs
, which gave a gay and grotesque aspect to the streets.
Macaulay.
(j)
(Astron.)
The twelfth part of the ecliptic or zodiac.
☞ The signs are reckoned from the point of intersection of the ecliptic and equator at the vernal equinox, and are named, respectively,
Aries
(♈),
Taurus
(♉),
Gemini
(II),
Cancer
(♋),
Leo
(♌),
Virgo
(♍),
Libra
(♎),
Scorpio
(♏),
Sagittarius
(♐),
Capricornus
(♑),
Aquarius
(♒),
Pisces
(♓). These names were originally the names of the constellations occupying severally the divisions of the zodiac, by which they are still retained; but, in consequence of the procession of the equinoxes, the signs have, in process of time, become separated about 30 degrees from these constellations, and each of the latter now lies in the sign next in advance, or to the east of the one which bears its name, as the constellation Aries in the sign Taurus, etc.
(k)
(Alg.)
A character indicating the relation of quantities, or an operation performed upon them;
as, the
sign
+ (plus); the
sign
– (minus); the
sign
of division ÷, and the like
.
(l)
(Med.)
An objective evidence of disease; that is, one appreciable by some one other than the patient.
☞ The terms symptom and and sign are often used synonymously; but they may be discriminated. A sign differs from a symptom in that the latter is perceived only by the patient himself. The term sign is often further restricted to the purely local evidences of disease afforded by direct examination of the organs involved, as distinguished from those evidence of general disturbance afforded by observation of the temperature, pulse, etc. In this sense it is often called physical sign.
(m)
(Mus.)
Any character, as a flat, sharp, dot, etc.
(n)
(Theol.)
That which, being external, stands for, or signifies, something internal or spiritual; – a term used in the Church of England in speaking of an ordinance considered with reference to that which it represents.
An outward and visible
sign
of an inward and spiritual grace.
Bk. of Common Prayer.
☞ See the Table of
Arbitrary Signs
, p. 1924.
Sign manual
.
(a)
(Eng. Law)
The royal signature superscribed at the top of bills of grants and letter patent, which are then sealed with the privy signet or great seal, as the case may be, to complete their validity
.
(b)
The signature of one’s name in one's own handwriting.
Craig. Tomlins. Wharton.
Syn. – Token; mark; note; symptom; indication; signal; symbol; type; omen; prognostic; presage; manifestation. See
Emblem
.

,
Verb.
T.
[
imp. & p. p.
Signed
;
p. pr. & vb. n.
Signing
.]
[OE.
seinen
to bless, originally, to make the sign of the cross over; in this sense fr. ASS.
segnian
(from
segn
, n.), or OF.
seignier
, F.
signer
, to mark, to sign (in sense 3), fr. L.
signare
to mark, set a mark upon, from
signum
. See
Sign
,
Noun.
]
1.
To represent by a sign; to make known in a typical or emblematic manner, in distinction from speech; to signify.
I
signed
to Browne to make his retreat.
Sir W. Scott.
2.
To make a sign upon; to mark with a sign.
We receive this child into the congregation of Christ's flock, and do
sign
him with the sign of the cross.
Bk. of Com Prayer.
3.
To affix a signature to; to ratify by hand or seal; to subscribe in one's own handwriting.
Inquire the Jew's house out, give him this deed,
And let him
sign
it.
Shakespeare
4.
To assign or convey formally; – used with away.
5.
To mark; to make distinguishable.
Shak.

,
Verb.
I.
1.
To be a sign or omen.
[Obs.]
Shak.
2.
To make a sign or signal; to communicate directions or intelligence by signs.
4.
To write one's name, esp. as a token of assent, responsibility, or obligation;
as, he
signed
in red ink
.

,
Noun.
[L. signum; Gr. deicnumt.]
1.
A token; something by which another thing is shown or represented; any visible thing, any motion, appearance or event which indicates the existence or approach of something else. Thus we speak of signs of fair weather or of a storm, and of external marks which are signs of a good constitution.
2.
A motion, action, nod or gesture indicating a wish or command. They made signs to his father, how he would have him called. Luke 1.
3.
A wonder; a miracle; a prodigy; a remarkable transaction, event or phenomenon. Through mighty signs and wonders. Rom 15. Luke 11.
4.
Some visible transaction, event or appearance intended as proof or evidence of something else; hence; proof; evidence by sight. Show me a sign that thou talkest with me. Judges 6.
5.
Something hung or set near a house or over a door, to give notice of the tenant's occupation, or what is made or sold within; as a trader's sign; a tailor;s sign; the sign of the eagle.
6.
A memorial or monument; something to preserve the memory of a thing. What time the fire devoured two hundred and fifty men, and they became a sign. Num. 16.
7.
Visible mark or representation; as an outward sign of and inward and spiritual grace.
8.
A mark of distinction.
9.
Typical representation. The holy symbols or signs are not barely significative.
10.
In astronomy, the twelfth part of the ecliptic. The signs are reckoned from the point of intersection of the ecliptic and equator at the vernal equinox, and are named respectively, Aries, Taurus, Gemini, Cancer, Leo, Virgo, Libra, Scorpio, Sagittarius, Capricorns, Aquarius, Pisces. These names are borrowed from the constellations of the zodiac of the same denomination, which were respectively comprehended within the foregoing equal divisions of the ecliptic of the same name, but are considerably in advance of them. Thus the constellation Aries, is now in that part of the ecliptic called Taurus.
11.
In algebra, a character indicating the relation of quantities, or an operation performed by them; as the sign + plus prefixed to a quantity, indicates that the quantity is to be added; the sign - minus, denotes that the quantity to which it is prefixed is to subtracted. The former is prefixed to quantities called affirmative or positive; the latter to quantities called negative.
12.
The subscription of one's name; signature; as a sign manual.
13.
Among physicians, an appearance or symptom in the human body, which indicate its condition as to health or disease.
14.
In music, any character, as a flat, sharp, dot, &c.

,
Verb.
T.
sine.
1.
To mark with characters or one's name. To sign a paper, note, deed, &c. is to write one's name at the foot, or underneath the declaration, promise, covenant, grant, &c., by which the person makes it his own act, To sign one's name, is to write or subscribe it on the paper Signing does not now include sealing
2.
To signify; to represent typically. [Not in use.]
3.
To mark. 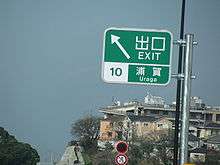