(lĕm′ŭn)
,
Noun.
[F.
limon
, Per.
līmūn
; cf. Ar.
laimūn
, Sp.
limon
, It.
limone
. Cf.
Lime
a fruit.]
1.
(Bot.)
An oval or roundish fruit resembling the orange, and containing a pulp usually intensely acid. It is produced by a tropical tree of the genus
Citrus
, the common fruit known in commerce being that of the species
Citrus Limonum
or
Citrus Medica
(var.
Limonum
). There are many varieties of the fruit, some of which are sweet.
2.
The tree which bears lemons; the lemon tree.

, n.
1.
The fruit of a tree belonging to the genus Citrus, which grows in warm climates. This fruit furnishes a cooling acid juice, which forms an ingredient in some of our most delicious liquors.
2.
Lemon or lemon tree, the tree that produces lemons. 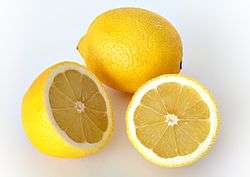 A whole and a cut lemon. 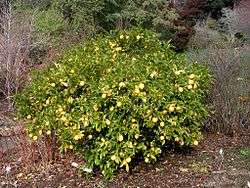