(lăd′dẽr)
,
Noun.
[OE.
laddre
, AS.
hlǣder
,
hlǣdder
; akin to OFries.
hladder
, OHG.
leitara
, G.
leiter
, and from the root of E.
lean
, v. √40. See
Lean
,
Verb.
I.
, and cf.
Climax
.]
1.
A frame usually portable, of wood, metal, or rope, for ascent and descent, consisting of two side pieces to which are fastened cross strips or rounds forming steps.
Some the engines play,
And some, more bold, mount
ladders
to the fire.
Dryden.
Lowliness is young ambition’s
ladder
.
Shakespeare
Fish ladder
.
See under
Fish
.
–
Ladder beetle
(Zool.)
,
an American leaf beetle (
Chrysomela scalaris
). The elytra are silvery white, striped and spotted with green; the under wings are rose-colored. It feeds upon the linden tree.
–
Ladder handle
,
an iron rail at the side of a vertical fixed ladder, to grasp with the hand in climbing.
–
Ladder shell
(Zool.)
,
a spiral marine shell of the genus
Scalaria
. See
Scalaria
.

, n.
1.
A frame of wood, consisting of two side pieces, connected by rounds inserted in them at suitable distances, and thus forming steps, by which persons may ascend a building, &c.
2.
That by which a person ascends or rises; means of ascending; as a ladder made of cords.
Lowliness is young ambition's ladder.
3.
Gradual rise; elevation.
Mounting fast towards the top of the ladder ecclesiastical. 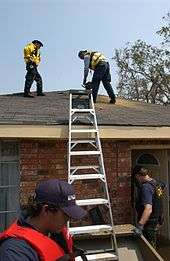 Members of the Federal Emergency Management Agency (FEMA) climbing on to the roof of a house using a ladder (sense 1) to search for residents affected by Hurricane Katrina in New Orleans, Louisiana, USA, August 2005

A woman's stocking with a ladder (sense 4) in it

For stockings touted as resistant to ladders, the phrase “ladder resist” is used in the UK. The American equivalent is “run resistant”.