,
Adj.
Having the heaves.

,
Adj.
[
Com
par.
Heavier
;
sup
erl.
Heaviest
.]
[OE.
hevi
, AS.
hefig
, fr.
hebban
to lift, heave; akin to OHG.
hebig
,
hevig
, Icel.
höfigr
,
höfugr
. See
Heave
.]
1.
Heaved or lifted with labor; not light; weighty; ponderous;
as, a
heavy
stone
; hence, sometimes, large in extent, quantity, or effects;
as, a
heavy
fall of rain or snow; a
heavy
failure;
heavy
business transactions, etc.
; often implying strength;
as, a
heavy
barrier
; also, difficult to move;
as, a
heavy
draught
.
2.
Not easy to bear; burdensome; oppressive; hard to endure or accomplish; hence, grievous, afflictive;
as,
heavy
yokes, expenses, undertakings, trials, news, etc.
The hand of the Lord was
heavy
upon them of Ashdod.
1 Sam. v. 6.
The king himself hath a
heavy
reckoning to make.
Shakespeare
Sent hither to impart the
heavy
news.
Wordsworth.
Trust him not in matter of
heavy
consequence.
Shakespeare
3.
Laden with that which is weighty; encumbered; burdened; bowed down, either with an actual burden, or with care, grief, pain, disappointment.
The
heavy
[sorrowing] nobles all in council were.
Chapman.
A light wife doth make a
heavy
husband.
Shakespeare
4.
Slow; sluggish; inactive; or lifeless, dull, inanimate, stupid;
as, a
heavy
gait, looks, manners, style, and the like; a
heavy
writer or book.
Whilst the
heavy
plowman snores.
Shakespeare
Of a
heavy
, dull, degenerate mind.
Dryden.
Neither [is] his ear
heavy
, that it can not hear.
Is. lix. 1.
5.
Strong; violent; forcible;
as, a
heavy
sea, storm, cannonade, and the like
.
6.
Loud; deep; – said of sound;
as,
heavy
thunder
.
But, hark! that
heavy
sound breaks in once more.
Byron.
7.
Dark with clouds, or ready to rain; gloomy; – said of the sky.
8.
Impeding motion; cloggy; clayey; – said of earth;
as, a
heavy
road, soil, and the like
.
9.
Not raised or made light;
as,
heavy
bread
.
10.
Not agreeable to, or suitable for, the stomach; not easily digested; – said of food.
11.
Having much body or strength; – said of wines, or other liquors.
12.
With child; pregnant.
[R.]
Heavy artillery
.
(Mil.)
(a)
Guns of great weight or large caliber, esp. siege, garrison, and seacoast guns.
(b)
Troops which serve heavy guns.
–
Heavy cavalry
.
See under
Cavalry
.
–
Heavy fire
(Mil.)
,
a continuous or destructive cannonading, or discharge of small arms.
–
Heavy metal
(Mil.)
,
large guns carrying balls of a large size; also, large balls for such guns.
–
Heavy metals
.
(Chem.)
See under
Metal
.
–
Heavy weight
,
in wrestling, boxing, etc., a term applied to the heaviest of the classes into which contestants are divided. Cf.
Feather weight
(c)
, under
Feather
.
☞ Heavy is used in composition to form many words which need no special explanation; as, heavy-built, heavy-browed, heavy-gaited, etc.

,
Adj.
hev'y.
1.
Weighty; ponderous; having great weight; tending strongly to the center of attraction; contrary to light; applied to material bodies; as a heavy stone; a heavy load.
2.
Sad; sorrowful; dejected; depressed in mind.
A light wife makes a heavy husband.
So is he that singeth songs to a heavy heart. Prov.25.
3.
Grievous; afflictive; depressing to the spirits; as heavy news; a heavy calamity.
4.
Burdensome; oppressive; as heavy taxes.
Make thy father's heavy yoke--lighter. 1 Kings.12.
5.
Wanting life and animation; dull.
My heavy eyes you say confess
A heart to love and grief inclined.
6.
Drowsy; dull.
Their eyes were heavy. Matt.26. Luke.9.
7.
Wanting spirit or animation; destitute of life or rapidity of sentiment; dull; as a heavy writer; a heavy style.
8.
Wanting activity or vivacity; indolent.
But of a heavy, dull, degenerate mind.
9.
Slow; sluggish.
He walks with a heavy gait.
10. Burdensome; tedious; as heavy hours.
Time lies heavy on him who has no employment.
11. Loaded; encumbered; burdened.
He found his men heavy, and laden with booty.
12. Lying with weight on the stomach; not easily digested; as, oily food is heavy to the stomach.
13. Moist; deep; soft; miry; as heavy land; a heavy soil. We apply heavy to soft loamy or clayey land, which makes the draught of a plow or wagon difficult and laborious. So we say, a heavy road.
14. Difficult; laborious; as a heavy draught.
15. Weary; supported with pain or difficulty.
And the hands of Moses were heavy. Ex.17.
16. Inflicting severe evils,punishments or judgments.
The hand of the Lord was heavy on them of Ashdod.
l Sam.5.
17. Burdensome; occasioning great care.
This thing is too heavy for thee. Ex.18.
18. Dull; not hearing; inattentive.
Neither his ears heavy, that he cannot hear. Is.59.
19. Large, as billows; swelling and rolling with great force; as a heavy sea.
20. Large in amount; as a heavy expense; a heavy debt.
21. Thick; dense; black; as a heavy cloud.
22. Violent; tempestuous; as a heavy wind or gale.
23. Large; abundant; as a heavy fall of snow or rain.
24. Great; violent; forcible; as a heavy fire of cannon or small arms.
25. Not raised by leaven or fermentation; not light; clammy; as heavy bread.
26. Requiring much labor or much expense; as a heavy undertaking.
27. Loud; as heavy thunder.
Heavy metal, in military affairs, signifies large guns, carrying balls of a large size, or it is applied to large balls themselves. 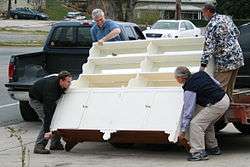 Look at pages starting with heavy.

having great weight
serious
slang: good
of rate of flow: high
slang: armed
of music: loud, distorted
of weather:hot and humid
of a person: doing the specified activity more intensely than most other people
of great force
laden to a great extent