(kōrt)
,
Noun.
[OF.
court
,
curt
,
cort
, F.
cour
, LL.
cortis
, fr. L.
cohors
,
cors
,
chors
, gen.
cohortis
,
cortis
,
chortis
, an inclosure, court, thing inclosed, crowd, throng;
co-
+ a root akin to Gr.
χορτόσ
inclosure, feeding place, and to E.
garden
,
yard
,
orchard
. See
Yard
, and cf.
Cohort
,
Curtain
.]
1.
An inclosed space; a courtyard; an uncovered area shut in by the walls of a building, or by different building; also, a space opening from a street and nearly surrounded by houses; a blind alley.
The
courts
of the house of our God.
Ps. cxxxv. 2.
And round the cool green
courts
there ran a row
Of cloisters.
Tennyson.
Goldsmith took a garret in a miserable
court
.
Macaulay.
2.
The residence of a sovereign, prince, nobleman, or other dignitary; a palace.
Attends the emperor in his royal
court
.
Shakespeare
This our
court
, infected with their manners,
Shows like a riotous inn.
Shakespeare
3.
The collective body of persons composing the retinue of a sovereign or person high in authority; all the surroundings of a sovereign in his regal state.
My lord, there is a nobleman of the
court
at door would speak with you.
Shakespeare
Love rules the
court
, the camp, the grove.
Sir. W. Scott.
4.
Any formal assembling of the retinue of a sovereign;
as, to hold a
court
.
The princesses held their
court
within the fortress.
Macaulay.
5.
Attention directed to a person in power; conduct or address designed to gain favor; courtliness of manners; civility; compliment; flattery.
No solace could her paramour intreat
Her once to show, ne
court
, nor dalliance.
Spenser.
I went to make my
court
to the Duke and Duchess of Newcastle.
Evelyn.
6.
(Law)
(a)
The hall, chamber, or place, where justice is administered.
(b)
The persons officially assembled under authority of law, at the appropriate time and place, for the administration of justice; an official assembly, legally met together for the transaction of judicial business; a judge or judges sitting for the hearing or trial of causes.
(c)
A tribunal established for the administration of justice.
(d)
The judge or judges; as distinguished from the counsel or jury, or both.
Most heartily I do beseech the
court

To give the judgment.
Shakespeare
7.
The session of a judicial assembly.
8.
Any jurisdiction, civil, military, or ecclesiastical.
9.
A place arranged for playing the game of tennis; also, one of the divisions of a tennis court.

,
Verb.
T.
[
imp. & p. p.
Courted
;
p. pr. & vb. n.
Courting
.]
1.
To endeavor to gain the favor of by attention or flattery; to try to ingratiate one’s self with.
By one person, hovever, Portland was still assiduously
courted
.
Macaulay.
2.
To endeavor to gain the affections of; to seek in marriage; to woo.
If either of you both love Katharina . . .
Leave shall you have to
court
her at your pleasure.
Shakespeare
3.
To attempt to gain; to solicit; to seek.
They might almost seem to have
courted
the crown of martyrdom.
Prescott.
Guilt and misery . . .
court
privacy and solitude.
De Quincey.
4.
To invite by attractions; to allure; to attract.
A well-worn pathway
courted
us
To one green wicket in a privet hedge.
Tennyson.

,
Noun.
1.
A place in front of a house, inclosed by a wall or fence; in popular language, a court-yard.
2.
A space inclosed by houses, broader than a street; or a space forming a kind of recess from a public street.
3.
A palace; the place of residence of a king or sovereign prince.
4.
The hall, chamber or place where justice is administered.
St. Paul was brought into the highest court in Athens.
5.
Persons who compose the retinue or council of a king or emperor.
6.
The persons or judges assembled for hearing and deciding causes, civil, criminal, military, naval or ecclesiastical; as a court of law; a court of chancery; a court martial; a court of admiralty; an ecclesiastical court; court baron; &c. Hence,
7.
Any jurisdiction, civil, military, or ecclesiastical.
8.
The art of pleasing; the art of insinuation; civility; flattery; address to gain favor. Hence the phrase, to make court, to attempt to please by flattery and address.
9.
In scripture, an inclosed part of the entrance into a palace or house. The tabernacle had one court; the temple, three. The first was the court of the Gentiles; the second, the court of Israel, in which the people worshiped; the third was the court of the priests, where the priests and Levites exercised their ministry. Hence places of public worship are called the courts of the Lord.
10.
In the United States, a legislature consisting of two houses; as the General court of Massachusetts. The original constitution of Connecticut established a General Court in 1639.
11.
A session of the legislature.

,
Verb.
T.
1.
In a general sense, to flatter; to endeavor to please by civilities and address; a use of the word derived from the manners of a court.
2.
To woo; to solicit for marriage.
A thousand court you, though they court in vain.
3.
To attempt to gain by address; to solicit; to seek; as, to court commendation or applause.

enclosed space; a courtyard
residence of a sovereign, prince, nobleman, or ether dignitary
collective body of persons composing the retinue of a sovereign or person high in authority
formal assembling of the retinue of a sovereign
attention directed to a person in power
hall, chamber, or place, where justice is administered
persons officially assembled under authority of law
tribunal established for the administration of justice
judge or judges
session of a judicial assembly
jurisdiction
place for playing the game of tennis and some other ball games
A man courting a woman by giving her flowers, in a 14th century work

to attempt to win over

A court (def. 7) assembled to hear the testimony of Charles Lindbergh. The room is also a court (def. 6). 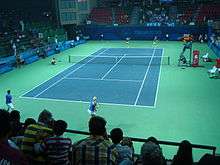