(k?r′n?r)
,
Noun.
[OF.
corniere
,
cornier
, LL.
cornerium
,
corneria
, fr. L.
cornu
horn, end, point. See
Horn
.]
1.
The point where two converging lines meet; an angle, either external or internal.
2.
The space in the angle between converging lines or walls which meet in a point;
as, the chimney
corner
.
3.
An edge or extremity; the part farthest from the center; hence, any quarter or part.
From the four
corners
of the earth they come.
Shakespeare
4.
A secret or secluded place; a remote or out of the way place; a nook.
This thing was not done in a
corner
.
Acts xxvi. 26.
5.
Direction; quarter.
Sits the wind in that
corner
!
Shakespeare
6.
The state of things produced by a combination of persons, who buy up the whole or the available part of any stock or species of property, which compels those who need such stock or property to buy of them at their own price;
as, a
corner
in a railway stock
.
[Broker’s Cant]
Corner stone
,
the stone which lies at the corner of two walls, and unites them; the principal stone; especially, the stone which forms the corner of the foundation of an edifice; hence, that which is fundamental importance or indispensable.
“A prince who regarded uniformity of faith as the corner stone of his government.”
Prescott.
–
Corner tooth
,
one of the four teeth which come in a horse's mouth at the age of four years and a half, one on each side of the upper and of the lower jaw, between the middle teeth and the tushes.

,
Noun.
[See Horn and Grain.]
1.
The point where two converging lines meet; properly, the external point; an angle; as, we meet at the corner of the state-house, or at the corner of two streets.
2.
The interior point where two lines meet; an angle.
3.
The space between two converging lines or walls which meet in a point. Hence,
4.
An inclosed place; a secret or retired place.
This thing was not done in a corner. Acts 26.
5.
Indefinitely any part; a part. They searched every corner of the forest. They explored all corners of the country.
6.
The end, extremity or limit; as the corners of the head or beard. Leviticus 21 and 19.
Corner-teeth of a horse, the foreteeth between the middling teeth and the tushes, two above and two below, on each side of the jaw, which shoot when the horse is four years and a half old. 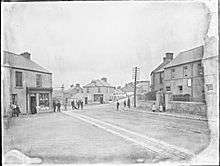 A corner (junction of streets) in Cork, Ireland, circa 1910

point where two converging lines meet — see angle
space in the angle between converging lines or walls
projection into space of an angular solid
intersection of two streets
part or region farthest from the center
secret or secluded place
business: interest that is sufficient for price manipulation
baseball: one of the four vertices of the strike zone
baseball: first or third base
football: corner kick — see corner kick

to drive into a corner
to trap in a difficult position
business: to get sufficient command of a stock or commodity to be able to manipulate prices
automotive: to turn a corner
automotive: to handle while turning

This verb conjugates as a first-group verb ending in -er. The forms that would normally end in *-rns, *-rnt are modified to rz, rt. Old French conjugation varies significantly by date and by region. The following conjugation should be treated as a guide.