,
Verb.
T.
To stop the orifice in the bilge of a cask with a bung; to close up. 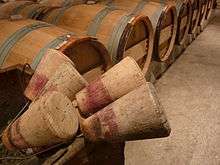 to plug
to heave
to batter
to pass a bribe

This entry has fewer than three known examples of actual usage, the minimum considered necessary for clear attestation, and may not be reliable. Tok Pisin is subject to a special exemption for languages with limited documentation. If you speak it, please consider editing this entry or adding citations. See also Help and the Community Portal.

From Medieval Dutch bonge, bonne or bonghe ‎(“stopper”), or perhaps from French bonde, which may itself be either of Germanic origin, or from Proto-Celtic *bunda - either way probably from puncta ‎(“hole”), the feminine singular form of Latin punctus, perfect passive participle of pungō ‎(“pierce into, prick”).