(bēk)
,
Noun.
[OE.
bek
, F.
bec
, fr. Celtic; cf. Gael. & Ir.
bac
,
bacc
,
hook
, W.
bach
.]
1.
(Zool.)
(a)
The bill or nib of a bird, consisting of a horny sheath, covering the jaws. The form varies much according to the food and habits of the bird, and is largely used in the classification of birds.
(b)
A similar bill in other animals, as the turtles.
(c)
The long projecting sucking mouth of some insects, and other invertebrates, as in the Hemiptera.
(d)
The upper or projecting part of the shell, near the hinge of a bivalve.
(e)
The prolongation of certain univalve shells containing the canal.
2.
Anything projecting or ending in a point, like a beak, as a promontory of land.
Carew.
3.
(Antiq.)
A beam, shod or armed at the end with a metal head or point, and projecting from the prow of an ancient galley, in order to pierce the vessel of an enemy; a beakhead.
4.
(Naut.)
That part of a ship, before the forecastle, which is fastened to the stem, and supported by the main knee.
5.
(Arch.)
A continuous slight projection ending in an arris or narrow fillet; that part of a drip from which the water is thrown off.
6.
(Bot.)
Any process somewhat like the beak of a bird, terminating the fruit or other parts of a plant.
7.
(Far.)
A toe clip. See
Clip
,
Noun.
(Far.)
.
8.
A magistrate or policeman.
[Slang, Eng.]

,
Noun.
[Eng. peak,pike, &c. The sense is, a shoot, or a point, from thrusting; and this word is connected with a numerous family. See Class Bg.]
1.
The bill, or nib of a bird, consisting of a horny substance, either straight or curving, and ending in a point.
2.
A pointed piece of wood, fortified with brass, resembling a beak, fastened to the end of ancient gallies; intended to pierce the vessels of an enemy. In modern ships, the beak-head is a name given to the forepart of a ship, whose forecastle is square, or oblong; a circumstance common to all ships of war, which have two or more tiers of guns.
Beak or beak-head, that part of a ship, before the forecastle, which is fastened to the stem, and supported by the main knee.
3.
In farriery, a little shoe, at the toe, about an inch long,turned up and fastened in upon the part of the hoof.
4.
Any thing ending in a point, like a beak. This in America is more generally pronounced peak.

,
Verb.
T.
Among cock fighters,to take hold with the beak. 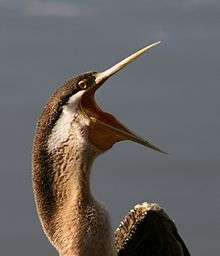 An Australasian darter (Anhinga novaehollandiae) with her beak wide open

structure projecting from a bird's face
similar structure in an octopus
metal point fixed on the bows of a war galley, used as a ram
slang: human nose — see schnozzle
slang: magistrate