,
Noun.
[D.
wagen
. √136. See
Wain
.]
1.
A wheeled carriage; a vehicle on four wheels, and usually drawn by horses; especially, one used for carrying freight or merchandise.
☞ In the United States, light wagons are used for the conveyance of persons and light commodities.
2.
A freight car on a railway.
[Eng.]
3.
A chariot
[Obs.]
Spenser.
4.
(Astron.)
The Dipper, or Charles’s Wain.
☞ This word and its compounds are often written with two g's (waggon, waggonage, etc.), chiefly in England. The forms wagon, wagonage, etc., are, however, etymologically preferable, and in the United States are almost universally used.
Wagon boiler
.
See the Note under
Boiler
, 3.
–
Wagon ceiling
(Arch.)
,
a semicircular, or wagon-headed, arch or ceiling; – sometimes used also of a ceiling whose section is polygonal instead of semicircular.
–
Wagon master
,
an officer or person in charge of one or more wagons, especially of those used for transporting freight, as the supplies of an army, and the like.
–
Wagon shoe
,
a skid, or shoe, for retarding the motion of a wagon wheel; a drag.
–
Wagon vault
.
(Arch.)
See under 1st
Vault
.

,
Verb.
I.
To wagon goods as a business;
as, the man
wagons
between Philadelphia and its suburbs
.

, n.
1.
A vehicle moved on four wheels, and usually drawn by horses; used for the transportation of heavy commodities. In America, light wagons are used for the conveyance of families, and for carrying light commodities to market, particulary a very light kind drawn by one horse.
2.
A chariot. [Not in use.]

,
Verb.
T.
To transport in a wagon. Goods are wagoned from London to the interior.

,
Verb.
I.
To practice the transportation of goods in a wagon. The man wagons between Philadelphia and Pittsburg. 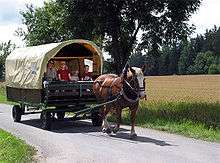 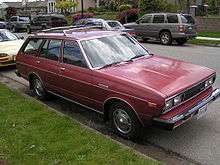 From English waggon, from Dutch wagen. The pronunciation was likely influenced by French wagon, which was also borrowed from English.

From English waggon, from Dutch wagen.