,
Noun.
[L.
trochus
an iron hoop, Gr. [GREEK] a wheel, fr. [GREEK] to run. See
Trochee
, and cf.
Truckle
,
Verb.
I.
]
1.
A small wheel, as of a vehicle; specifically
(Ord.)
, a small strong wheel, as of wood or iron, for a gun carriage.
2.
A low, wheeled vehicle or barrow for carrying goods, stone, and other heavy articles.
Goods were conveyed about the town almost exclusively in
trucks
drawn by dogs.
Macaulay.
3.
(Railroad Mach.)
A swiveling carriage, consisting of a frame with one or more pairs of wheels and the necessary boxes, springs, etc., to carry and guide one end of a locomotive or a car; – sometimes called bogie in England. Trucks usually have four or six wheels.
4.
(Naut.)
(a)
A small wooden cap at the summit of a flagstaff or a masthead, having holes in it for reeving halyards through.
(b)
A small piece of wood, usually cylindrical or disk-shaped, used for various purposes.
5.
A freight car.
[Eng.]
6.
A frame on low wheels or rollers; – used for various purposes, as for a movable support for heavy bodies.

,
Verb.
T.
To transport on a truck or trucks.

,
Verb.
T.
[
imp. & p. p.
Trucked
;
p. pr. & vb. n.
trucking
.]
[OE.
trukken
,F.
troquer
; akin to Sp. & Pg.
trocar
; of uncertain origin.]
To exchange; to give in exchange; to barter;
as, to
truck
knives for gold dust
.
We will begin by supposing the international trade to be in form, what it always is in reality, an actual
trucking
of one commodity against another.
J. S. Mill.

,
Verb.
I.
To exchange commodities; to barter; to trade; to deal.
A master of a ship, who deceived them under color of
trucking
with them.
Palfrey.
Despotism itself is obliged to
truck
and huckster.
Burke.
To
truck
and higgle for a private good.
Emerson.

,
Verb.
I.
[L. trochus, a round thing; Eng. truck.] To exchange commodities; to barter. Our traders truck with the Indians, giving them whiskey and trinkets for skins. [Truck is now vulgar.]

,
Noun.
Permutation; exchange of commodities; barter.
1.
A small wooden wheel not bound with iron; a cylinder.
2.
A small wheel; hence trucks, a low carriage for carrying goods, stone, &c. Indeed this kind of carriage is often called a truck, in the singular. 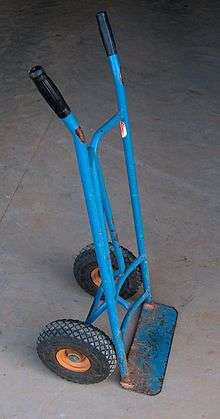 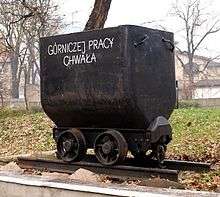 wheel of a gun-carriage
top of a flagpole
nautical: disc or rectangle of wood near or at the top of the mast
semi-trailer
vehicle designed for carrying cargo
two-wheeled wheelbarrow
wagon — see wagon
removal van
flatbed railway car
pivoting frame of a railwaycar
part of skateboard
theatre: platform with wheels
dirt or other messiness

For this etymology, the word is virtually obsolete. It really only survives as a fossil in the construction “to have no truck with”. In the US, the derived term truck garden is often confused with "produce raised to be trucked (transported) to market".

Perhaps a shortening of truckle, related to Latin trochus ‎(“iron hoop, wheel”) itself from the Greek τροχός.