,
Noun.
[For senses 2 & 3 cf. LG.
strutt
rigid.]
1.
The act of strutting; a pompous step or walk.
2.
(Arch.)
In general, any piece of a frame which resists thrust or pressure in the direction of its own length. See
Brace
, and Illust. of
Frame
, and
Roof
.
3.
(Engin.)
Any part of a machine or structure, of which the principal function is to hold things apart; a brace subjected to compressive stress; – the opposite of stay, and tie.

,
Verb.
I.
1.
To walk with a lofty proud gait and erect head; to walk with affected dignity.
Does he not hold up his head and strut in his gait?
2.
To swell; to protuberate.
The bellying canvas strutted with the gale. [Not used.]

,
Noun.
A lofty proud step or walk with the head erect; affectation of dignity in walking.

to swell; protuberate
to stand or walk stiffly
to walk proudly or haughtily
to cause to swell; enlarge
to protrude; cause to bulge

From a contraction of strutted. 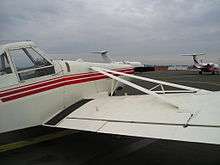