,
Adj.
[
Com
par.
Straiter
;
sup
erl.
Straitest
.]
[OE.
straight
,
streyt
,
streit
, OF.
estreit
,
estroit
, F.
étroit
, from L.
strictus
drawn together, close, tight, p. p. of
stringere
to draw tight. See 2nd
Strait
, and cf.
Strict
.]
1.
Narrow; not broad.
Strait
is the gate, and narrow is the way, which leadeth unto life, and few there be that find it.
Matt. vii. 14.
Too
strait
and low our cottage doors.
Emerson.
2.
Tight; close; closely fitting.
Shak.
3.
Close; intimate; near; familiar.
[Obs.]
“A strait degree of favor.”
Sir P. Sidney.
4.
Strict; scrupulous; rigorous.
Some certain edicts and some
strait
decrees.
Shakespeare
The
straitest
sect of our religion.
Acts xxvi. 5 (Rev. Ver.).
5.
Difficult; distressful; straited.
To make your
strait
circumstances yet
straiter
.
Secker.
6.
Parsimonious; niggargly; mean.
[Obs.]
I beg cold comfort, and you are so
strait
,
And so ingrateful, you deny me that.
Shakespeare

To a broad gate all built of beaten gold.
Spenser.
Honor travels in a
strait
so narrow
Where one but goes abreast.
Shakespeare
2.
Specifically:
(Geog.)
A (comparatively) narrow passageway connecting two large bodies of water; – often in the plural;
as, the
strait
, or
straits
, of Gibraltar; the
straits
of Magellan; the
strait
, or
straits
, of Mackinaw.
We steered directly through a large outlet which they call a
strait
, though it be fifteen miles broad.
De Foe.
3.
A neck of land; an isthmus.
[R.]
A dark
strait
of barren land.
Tennyson.
4.
Fig.: A condition of narrowness or restriction; doubt; distress; difficulty; poverty; perplexity; – sometimes in the plural;
as, reduced to great
straits
.
For I am in a
strait
betwixt two.
Phil. i. 23.
Let no man, who owns a Providence, grow desperate under any calamity or
strait
whatsoever.
South.
Ulysses made use of the pretense of natural infirmity to conceal the
straits
he was in at that time in his thoughts.
Broome.

,
Adj.
[See Straight.]
1.
Narrow; close; not broad.
Strait is the gate, and narrow is the way that leadeth to life, and few there be that find it. Matthew 7.
2.
Close; intimate; as a strait degree of favor.
3.
Strict; rigorous.
He now, forsooth, takes on him to reform some certain edicts, and some strait decrees.
4.
Difficult; distressful.
5.
Straight; not crooked.

,
Noun.
[See Straight.]
1.
A narrow pass or passage, either in a mountain or in the ocean, between continents or other portions of land; as the straits of Gibraltar; the straits of Magellan; the straits of Dover. [In this sense, the plural is more generally used than the singular, and often without any apparent reason or propriety.]
2.
Distress; difficulty; distressing necessity; formerly written streight. [Used either in the singular or plural.]
Let no man who owns a providence, become desperate under any calamity or strait whatsoever.
Ulysses made use of the pretense of natural infirmity to conceal the straits he was in at that time in his thoughts.

The adjective is often confused with straight. 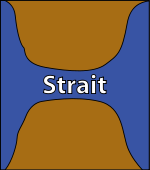 Sketch of a strait connecting two larger bodies of water.