(r?l′?k)
,
Noun.
[F.
relique
, from L.
reliquiae
, pl., akin to
relinquere
to leave behind. See
Relinquish
.]
[Formerly written also
relique
.]
1.
That which remains; that which is left after loss or decay; a remaining portion; a remnant.
Chaucer. Wyclif.
The
relics
of lost innocence.
Kebe.
The fragments, scraps, the bits and greasy
relics
.
Shakespeare
2.
The body from which the soul has departed; a corpse; especially, the body, or some part of the body, of a deceased saint or martyr; – usually in the plural when referring to the whole body.
There are very few treasuries of
relics
in Italy that have not a tooth or a bone of this saint.
Addison.
Thy
relics
, Rowe, to this fair urn we trust,
And sacred place by Dryden’s awful dust.
Pope.
3.
Hence, a memorial; anything preserved in remembrance;
as,
relics
of youthful days or friendships
.
The pearls were spilt;
Some lost, some stolen, some as
relics
kept.
Tennyson.

,
Noun.
[L. reliquiae, from relinquo, to leave; re and linquo.]
1.
That which remains; that which is left after the loss or decay of the rest; as the relics of a town; the relics of magnificence; the relics of antiquity. The relics of saints, real or pretended, are held in great veneration by the catholics.
2.
The body of a deceased person; a corpse. [Usually in the plural.] 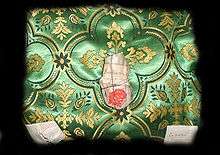 A Christian relic (a bone of a saint)

By comparison with synonyms, relic emphasizes age, and to some degree value – a “relic of a lost civilization”.

that which remains
old thing, possibly kept for sentimental reasons
part of a body or an object of religious significance