,
Verb.
I.
To turn informer; to betray one’s accomplice.
[Obs. or Colloq.]
If I be ta'en, I'll
peach
for this.
Shakespeare

(pēch)
,
Noun.
[OE.
peche
,
peshe
, OF.
pesche
, F.
pêche
, fr. LL.
persia
, L.
Persicum
(sc.
malum
) a Persian apple, a peach. Cf.
Persian
, and
Parsee
.]
1.
(Bot.)
A well-known high-flavored juicy fruit, containing one or two seeds in a hard almond-like endocarp or stone. In the wild stock the fruit is hard and inedible.
2.
The tree (
Prunus Persica
syn.
Amygdalus Persica
) which bears the peach fruit.
Guinea peach
, or
Sierra Leone peach
,
the large edible berry of the
Sarcocephalus esculentus
, a rubiaceous climbing shrub of west tropical Africa.
–
Palm peach
,
the fruit of a Venezuelan palm tree (
Bactris speciosa
).
–
Peach color
,
the pale red color of the peach blossom.
–
Peach-tree borer
(Zool.)
,
the larva of a clearwing moth (
Aegeria exitiosa
, or
Sannina, exitiosa
) of the family
Aegeriidae
, which is very destructive to peach trees by boring in the wood, usually near the ground; also, the moth itself. See Illust. under
Borer
.

,
Noun.
A tree and its fruit, of the genus Amygdalus, of many varieties. This is a delicious fruit, the produce of warm or temperate climates. In America, the peach thrives and comes to perfection in the neighborhood of Boston, northward of which it usually fails.

, for impeach, not used. 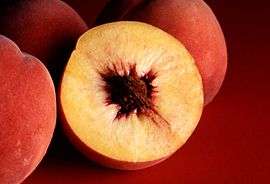 to inform on someone