,
Noun.
[F.
officier
. See
Office
, and cf.
Official
,
Noun.
]
1.
One who holds an office; a person lawfully invested with an office, whether civil, military, or ecclesiastical;
as, a church
officer
; a police
officer
; a staff
officer
.
“I am an officer of state.”
Shak.
2.
(U. S. Mil.)
Specifically, a commissioned officer, in distinction from a warrant officer or an enlisted man.
Field officer
,
General officer
,
etc. See under
Field
,
General
. etc.
–
Officer of the day
(Mil.)
,
the officer who, on a given day, has charge for that day of the guard, prisoners, and police of the post or camp; abbreviated
O. D.
,
OD
, or
O. O. D.
–
Officer of the deck
, or
Officer of the watch
(Naut.)
,
the officer temporarily in charge on the deck of a vessel, esp. a war vessel.

,
Noun.
A person commissioned or authorized to perform any public duty. Officers are civil, military or ecclesiastical. There are great officers of state, and subordinate officers. Military and naval officers of the same grade usually take rank according to the dates of their commissions. Non-commissioned officers are nominated by their captains, and appointed by the commanding officers of regiments.

,
Verb.
T.
To furnish with officers; to appoint officers over.
Count Pulaski raised a legionary corps, which he officered principally with foreigners. 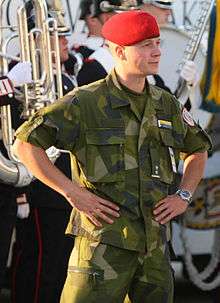 to supply with officers
to command like an officer