(här′lē̍-kĭn or -kwĭn)
,
Verb.
I.
To play the droll; to make sport by playing ludicrous tricks.

,
Verb.
T.
To remove or conjure away, as by a harlequin’s trick.
And kitten, if the humor hit
Has
harlequined
away the fit.
M. Green. 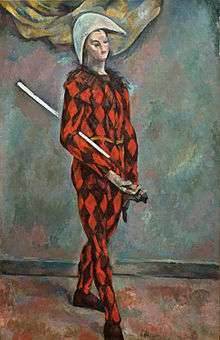