,
Noun.
[F.
tiretane
linsey-woolsey, akin to Sp.
tiritaña
a sort of thin silk; cf. Sp.
tiritar
to shiver or shake with cold.]
Woolen cloth, checkered or crossbarred with narrow bands of various colors, much worn in the Highlands of Scotland; hence, any pattern of tartan; also, other material of a similar pattern.
MacCullummore’s heart will be as cold as death can make it, when it does not warm to the
tartan
.
Sir W. Scott.
The sight of the
tartan
inflamed the populace of London with hatred.
Macaulay.

,
Noun.
[F.
tartane
, or Sp., Pg., or It.
tartana
; all perhaps of Arabic origin.]
(Naut.)
A small coasting vessel, used in the Mediterranean, having one mast carrying large leteen sail, and a bowsprit with staysail or jib.

,
Noun.
A small coasting vessel with one mast and a bowsprit, and the principal sail, which is very large, extended by a lateen-yard. 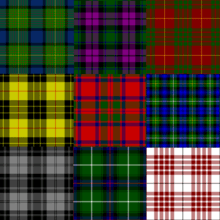 A montage of Scottish tartans (patterns) of various clans

woollen cloth with a distinctive pattern

Borrowing from French tartane, from Italian tartana, of uncertain origin.