(strēt)
,
Noun.
[OE.
strete
, AS.
strǣt
, fr. L.
strata
(sc.
via
) a paved way, properly fem. p. p. of
sternere
,
stratum
, to spread; akin to E.
strew
. See
Strew
, and cf.
Stratum
,
Stray
,
Verb.
&
Adj.
]
1.
Originally, a paved way or road; a public highway; now commonly, a thoroughfare in a city or village, bordered by dwellings or business houses.
He removed [the body of] Amasa from the
street
unto the field.
Coverdale.
At home or through the high
street
passing.
Milton.
☞ In an extended sense, street designates besides the roadway, the walks, houses, shops, etc., which border the thoroughfare.
His deserted mansion in Duke
Street
.
Macaulay.
Syn. – See
Way
.

,
Noun.
[L., strewed or spread. See Strew.]
1.
Properly, a paved way or road; but in usage, any way or road in a city, chiefly a main way, in distinction from a lane or alley.
2.
Among the people of New England, any public highway.
3.
Streets, plural, any public way, road or place.
That there be no complaining in our streets. Psalm 144. 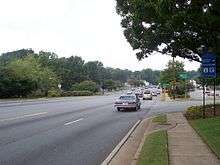 In the generical sense of "a road", the term is often used interchangeably with road, avenue, and other similar terms.

In the English language, in its narrow usage street specifically means a paved route within a settlement (generally city or town), reflecting the etymology, while a road is a route between two settlements. Further, in many American cities laid out on a grid (notably Manhattan, New York City) streets are contrasted with avenues and run perpendicular to each other, with avenues frequently wider and longer than streets.

In the sense of "a road", the prepositions in and on have distinct meanings when used with street, with "on the street" having idiomatic meaning in some dialects. In general for thoroughfares, "in" means "within the bounds of", while "on" means "on the surface of, especially traveling or lying", used relatively interchangeably ("don’t step in the road without looking", "I met her when walking on the road").

paved part of road in a village or a town

The vowel shifted from /aː/ in Latin to /æː/ in Old English (Anglo-Frisian brightening), /ɛː/ in Middle English, /eː/ in Early Modern English, and finally /iː/ in Modern English (the Great Vowel Shift). The overall shift was dramatic, from open /aː/ to close /iː/.