Equivalent surnames of "fisher" in other languages

Traditionally less common than fisherman, "fisher" is gaining in use as a more gender-inclusive alternative. 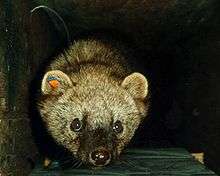 A fisher (Martes tennanti) tagged, in a cage