,
Noun.
[AS.
flocc
flock, company; akin to Icel.
flokkr
crowd, Sw.
flock
, Dan.
flok
; prob. orig. used of flows, and akin to E.
fly
. See
Fly
.]
1.
A company or collection of living creatures; – especially applied to sheep and birds, rarely to persons or (except in the plural) to cattle and other large animals;
as, a
flock
of ravenous fowl
.
Milton.
The heathen . . . came to Nicanor by
flocks
.
2 Macc. xiv. 14.
2.
A Christian church or congregation; considered in their relation to the pastor, or minister in charge.
As half amazed, half frighted all his
flock
.
Tennyson.

,
Noun.
[OE.
flokke
; cf. D.
vlok
, G.
flocke
, OHG.
floccho
, Icel.
flōki
, perh. akin to E.
flicker
,
flacker
, or cf. L.
floccus
, F.
floc
.]
1.
A lock of wool or hair.
I prythee, Tom, beat Cut’s saddle, put a few
flocks
in the point [pommel].
Shakespeare
2.
Woolen or cotton refuse (
s
ing.
or
pl.
), old rags, etc., reduced to a degree of fineness by machinery, and used for stuffing unpholstered furniture.
3.
Very fine, sifted, woolen refuse, especially that from shearing the nap of cloths, used as a coating for wall paper to give it a velvety or clothlike appearance; also, the dust of vegetable fiber used for a similar purpose.
Flock bed
,
a bed filled with flocks or locks of coarse wool, or pieces of cloth cut up fine.
“Once a flock bed, but repaired with straw.”
Pope.
–
Flock paper
,
paper coated with flock fixed with glue or size.

,
Verb.
T.
To coat with flock, as wall paper; to roughen the surface of (as glass) so as to give an appearance of being covered with fine flock.

,
Noun.
[L. floccus. It is the same radically as flake, and applied to wool or hair, we write it lock. See Flake.]
1.
A company or collection; applied to sheep and other small animals. A flock of sheep answers to a herd of larger cattle. But the word may sometimes perhaps be applied to larger beasts, and in the plural, flocks may include all kinds of domesticated animals.
2.
A company or collection of fowls of any kind, and when applied to birds on the wing, a flight; as a flock of wild-geese; a flock of ducks; a flock of blackbirds. in the United States, flocks of wild-pigeons sometimes darken the air.
3.
A body or crowd of people. [little used. Gr. a troop.]
4.
A lock of wool or hair. Hence, a flockbed.

,
Verb.
I.
To gather in companies or crowds; applied to men or other animals. People flock together. They flock to the play-house.
Friends daily flock. 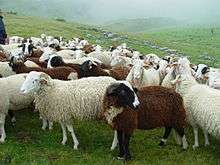 tufts of wool or cotton